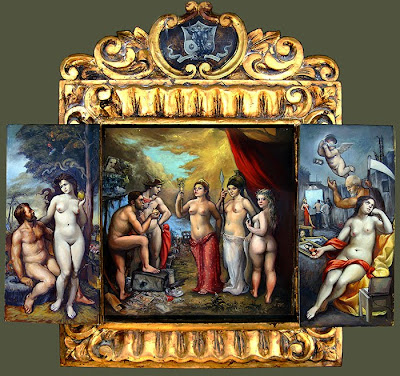 In this latest piece titled "El Juicio" or "The Judgment" I am inspired on various old master compositions on "The Judgment of Paris" This famous episode from Classic literature tells the story that led to the Illiad by Homer, of young Prince Paris before he learns about Helen and abducts her to the city of Troy. In this scene he is accompanied by Hermes and holds a golden apple that reads καλλίστῃ (kalliste)"To the fairest". Hermes sent by Zeus, the king of the gods, gives Paris the task of choosing from three of the Olympian goddesses who is the most beautiful. The goddesses stand in front of Paris awaiting for him to judge who might be the winner. Each one of them bribes the prince with tempting rewards. Hera holds a scepter and offers him to become king of the known world. Athena offers him infinite wisdom and victory in war. Aphrodite offers him the heart of the most beautiful mortal woman living at that time, Helen. Paris chooses Aphrodite's gift and there after Homer's story of Troy begins. I have reflected much on the idea of this famous "apple of discord" and seen an interesting relation with the apple of the tree of knowledge in the book of Genesis. The apple in many ancient civilizations signified many different things but many coincide with the idea of being blessed and cursed at the same time with knowledge beauty or immortality by consuming a special fruit. There is also the theme of free will and choice. Today we have many beauty contests and juried art shows that seem to be very subjective in their means of defining whats beautiful and who deserves to be called a great artist or gorgeous Miss universe. The problem of judgment goes back to the story of Paris. Who is to decide? By bribing, how corruptible is the jury? Today the apple of discord may well be called money and still we fall for these shows where someone well respected and apparently "on top" decides what we should consider adorable and beautiful, what we should spend time looking at and consuming. This painting is not only a tribute to the classical theme of the Judgment of Paris but also an open reflection on the question of judgment. There are many symbols hidden and not so hidden in the work  and I could write a lot about the meaning of these. But  in the end all brought together in this context ask the same eternal question QUIDNAM JUDICARE (Who is the judge?) 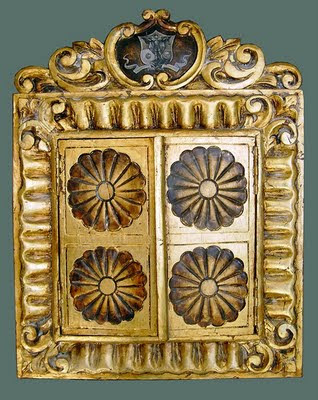