It was in December 2016, that I finally started to work on my first formal Tarot deck, The Tarot Novi Mundi (New World Tarot). I've had the project in mind for years, being intrigued by the mysterious deck of cards and incorporating the imagery in many of my paintings starting in 2005.   In the following blog article, divided in three parts, I'll share my first encounter with the Tarot, how I've used it in my work to how I eventually created my first deck of cards.

As I mentioned this project has been haunting me for some time with people constantly asking me when I was going to do it. But it wasn't until  September, 2016 when I re-discovered my very first deck of cards, the 1JJ Swiss Tarot, that the epiphany and great moment of revelation came to me. The original 1JJ Swiss Tarot, inspired after the earlier Tarot of Marseille was made around 1860 by Johannes Müller  in Diessenhofen, Switzerland and reprinted by US Games Stuart R. Kaplan in 1970. In 2016 I travelled to Puerto Rico to visit my mother. I incidentally found the deck hidden behind some books in my mom's house in Aguadilla, while looking for childhood memories and toys I grew up with.  The cards were in it's original box wrapped in a small plastic bag to keep them from humidity and bugs. I felt as if for some mysterious reason these cards had a special purpose and meaning in my life so I brought the cards with me to Houston, Texas, where I currently live. 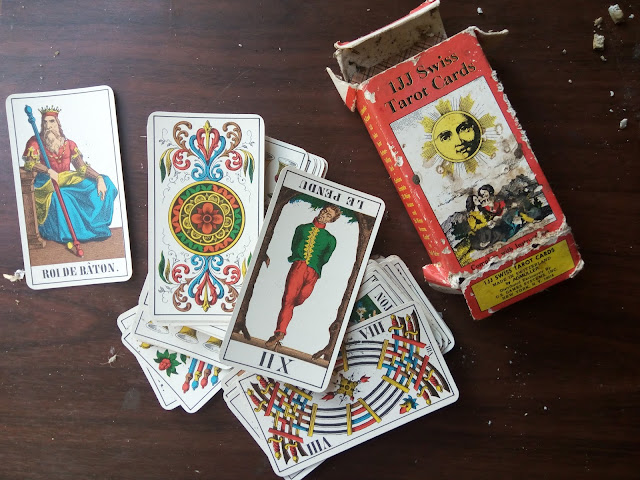 Exactly one year later (2017) Hurricane Maria hit the island, killing people, sweeping much of the already debilitated infrastructure and destroying many homes including my mother's house. Luckily my mom was safe and sound in Florida at the time. Not much survived in the house after the hurricane and the looting in the aftermath. I can't help but think of all the things I could have saved from the house, If I just knew beforehand. From old books, to photos, memories and so much artwork,  most of it now gone forever. But somehow and for some reason I managed to bring back this compact deck of cards with me.

I remember well the day and circumstances which led me to acquire this deck in the first place, back in Puerto Rico in 1993. Right before going to the movie theater to see Sam Raimi's Army of Darkness,  my brother, our friend Cesar and I  stopped by a bookshop. Cesar bought a Tarot deck wanting to know his future. After shuffling the cards and asking a question about his future, The Devil, The Tower and the nine of swords came out. We joked about his ongoing bad luck and after watching the movie, we were on our way home when all of the sudden Cesar's car's engine broke down in the middle of the road in Aguadilla. We had to walk to the mall and call mom to pick us up. Convinced the cards were responsible for his bad luck, Cesar decided to sell the cards to me for a just five bucks.  At the time I did not think much of it other than having fun using the cards with friends. I did not really believe in the power of fortune telling, was not specially superstitious and to this day remain a skeptic. But the cards had a grip on my imagination and I always thought there was something more to them. I was intrigued by the both familiar and obscure archetypes found in the 22 Major Arcana.

That year I graduated from high school and went on to study painting at The School of Fine Arts in San Juan. At the time I was drawn to the mystical as well as the work of the Old Masters, but the Tarot wasn't present in my visual repertoire. It wasn't until 2005, when I was pursuing my M.F.A. at the Savannah College of Art & Design in Savannah, Georgia, that a renewed interest in the Tarot took over me. At the time I was reading books on Alchemy, History and Colonialism. Although my thesis IConsumer revolved around the issues of Spanish Colonial Art Iconography and American Consumerism, I kept the Tarot as part of my visual toolbox of symbols and archetypes.


With time my personal exploration and interest in Tarot intensified.  Once I graduated in 2007, I started looking at the Pagan roots of Christian Iconography. This led me into the exploration of mythological narratives that  later in 2008-2010 I combined with Christian Icons and my appropriated consumer culture brands, logos and fast food characters.  By 2011 I was already studying archetypal astrology and infusing my work with deeper meaning. This was also the time I started to seriously consider creating a Tarot deck of cards. On the second part of this article, I'll further discuss how I saw all these connections and how the archetypes from all these traditions came together in my paintings. Stay tuned for more as this is just the beginning.

Posted by Patrick McGrath at 2:16 PM No comments: