For nearly 12 years already I've been using the Tarot as inspiration for my paintings but also as a creative tool for my narratives. It helps bring out ideas and its ever changing flexible and seemingly random character makes it a superb tool for surrealist work and exploring the subconscious mind. From Albrecht Durer to Salvador Dali, the Tarot has been both an influence and inspiration for many artists. Here, I'll be sharing with you my own approach to the Tarot as it becomes a creative journey within the painting process itself. 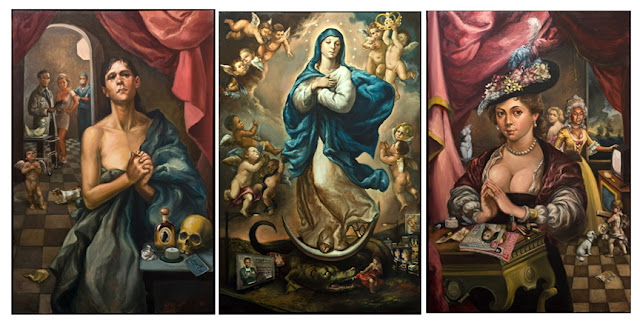 The Tarot is composed of 22 Major Arcana and 56 Minor Arcana. The Major Arcana are the most well known and emblematic for they represent universal archetypes present in all of human history. I'll guide you briefly through the first nine. Why nine? Besides having nine muses that inspire artists since ancient Greece, this number also represents the end of the cycle in the decimal system . Within the Tarot's Major Arcana, ninth card: The Hermit seems to be a good way to end "The Work" as the artist retires and lets the painting dry. With the next card: the tenth Major Arcana: Wheel Of Fortune, the work is done, exhibited and up to outer circumstances in the world to decide what happens next. From The Magician to The Hermit we see nine central figures (except  for The Lovers) that act as counselors in each and every stage of the creative process. I often like to imagine each and one of these Major Arcana as guides or artist's themselves that have useful advice for us and can assist us in every step of our process. 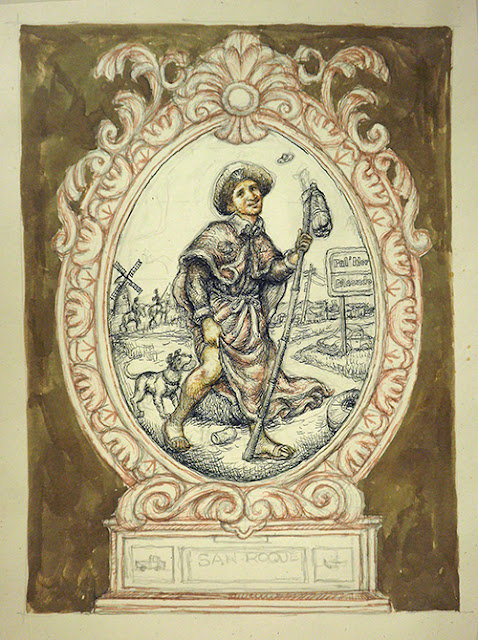 The Fool or the unnumbered Major Arcana which is also a cero "0", we may identify with ourselves, the artist, who journeys into the unknown and will meet and learn from each of the following characters. At the same time, The Fool will become each of these characters he encounters as he/she completes "The Work". I know I'm not alone in the feeling like a fool when I paint, searching for answers, making mistakes along the way, not knowing what to expect. 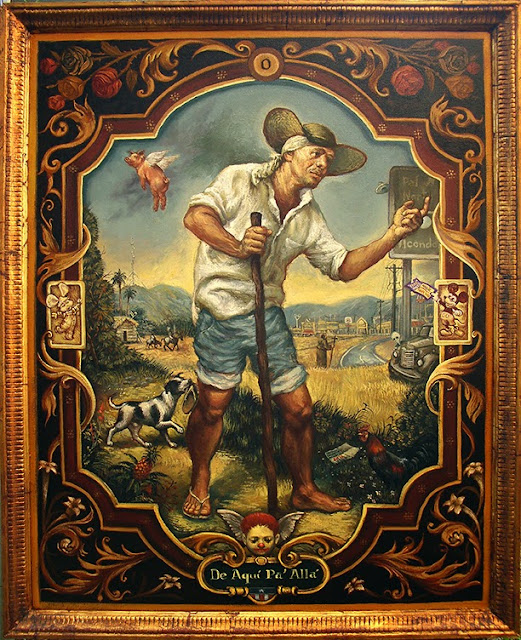 1. The Magician and the work begin with preparation and skill. There is much to be learned from this fellow. The Magician teaches us that anything can be accomplished with our abilities, dexterity and mastery over the materials. Most Tarot decks present this figure in front of a table holding different objects associated with his "art". He is about to perform a magic trick or even sell us some stuff. In any case, what he's about to do requires focused skill. By setting up our work space neatly and orienting all energy to our craft, the work begins. This is a card of initiation and it all starts with the tactile experience of getting your hands on the materials. The Magician tells us not to be afraid to experiment and to feel free to dive in and make mistakes. This is how we learn. Talent alone is not enough. Practice makes perfect. He encourages us to deal with matter, how to master our tools, to mix colors as an alchemist and apply them as a magician. As soon as he sees The Fool stumbling around, he can be heard saying:"Look, this is how it's done! Get in your studio and get to work!". 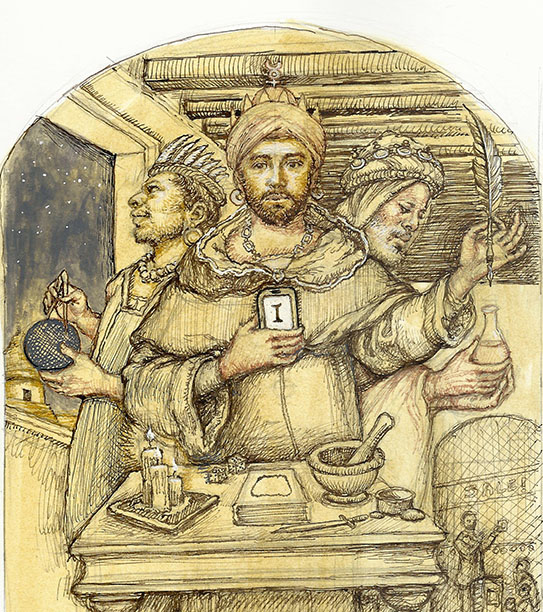 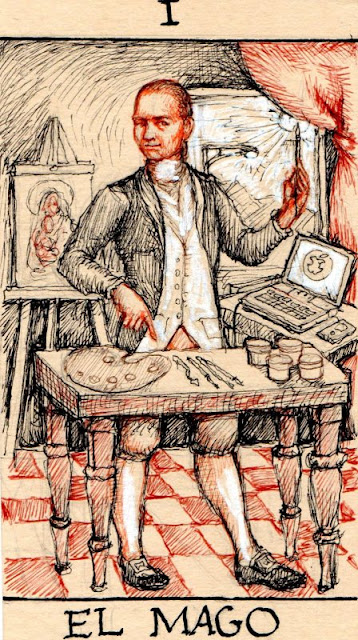 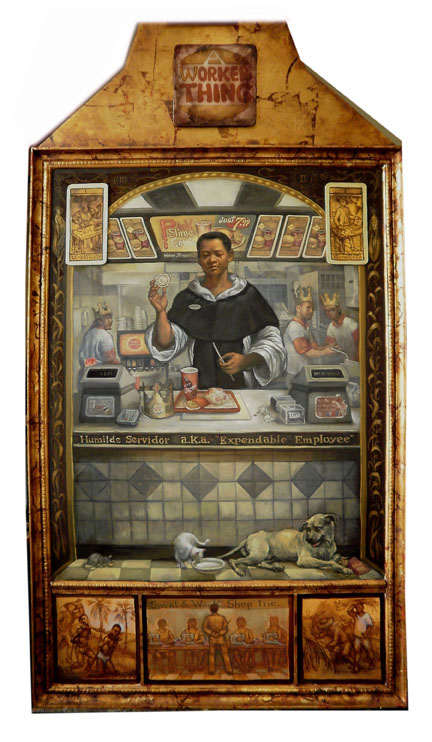 2. The High Priestess welcomes The Fool that has recently learned the secret techniques of The Magician, with a subtle smile and mysterious gaze. She knows something The Fool/Magician doesn't. In most decks she is shown sitting passively holding a scroll or book. She is also known as "The Popess", for she is a virginal purveyor of hidden and sacred wisdom. She remains silent and in introspection and inspires us to dream and listen to our inner voice. Painting techniques are nothing without intuition and imagination. There is a subconscious Lunar energy that needs to be expressed in our art. The High Priestess teaches us to be patient, silent and allow our inner child to dream, play and be creative. She becomes the protector of this child and guides us into the next step in our art. By keeping a private drawing journal and writing down our thoughts and dreams, our inner child is free and our work is taken to the next level .She whispers into our ears deep enigmatic words that can only be expressed through Art. 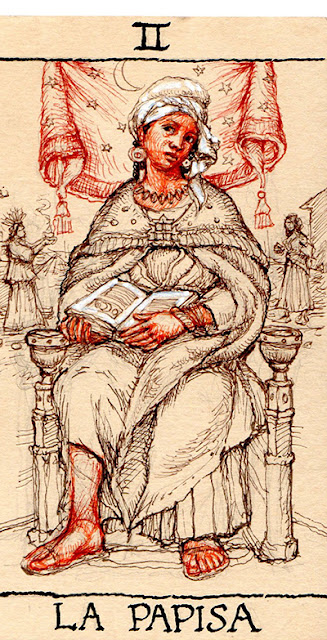 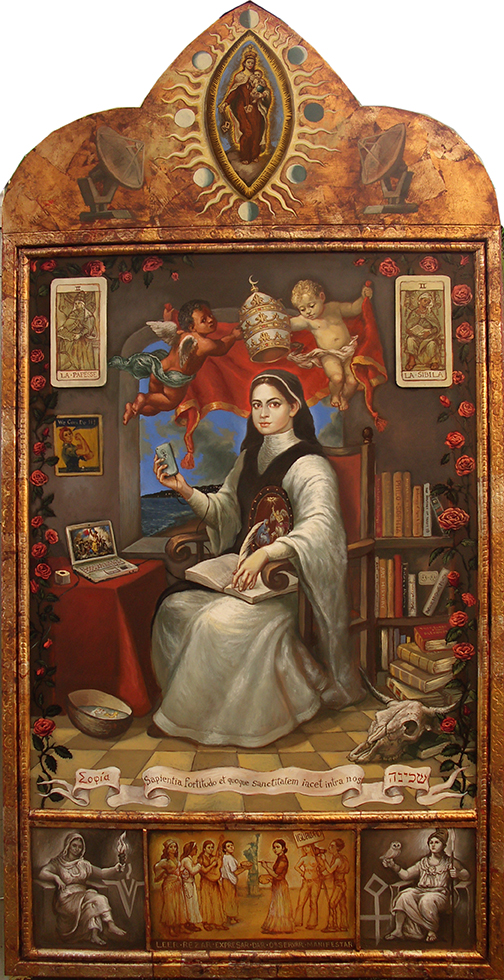 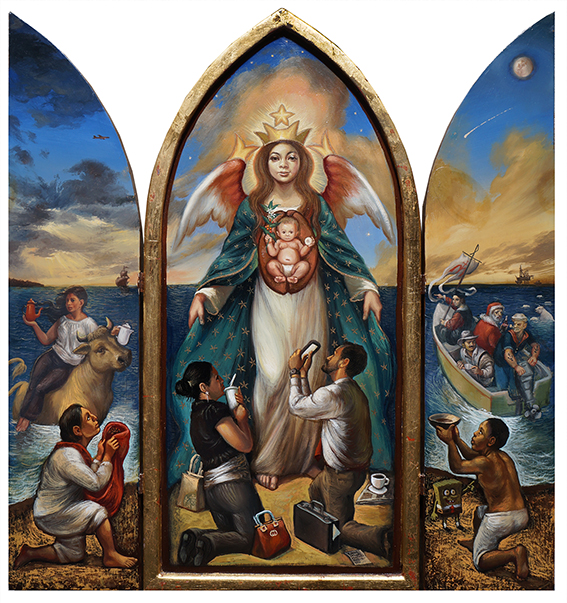 3. The Empress is the next person we encounter. While the High Priestess embodied the Spiritual Virgin archetype, The Empress represents the Earthly Mother archetype. I like to think of her as "The Muse" or even Venus (Aphrodite) the Goddess herself. Being the third card within the Major Arcana, she represents grace, as in the Three Graces or even the Nine Muses (3+3+3=9) She will speak loud and clear if she finds the artist at work, committed and with the inner child in charge after meeting with The High Priestess. Three is creation itself. It takes a man and a woman to make a child (1+2=3) The Empress encourages us to take our technique and imagination and materialize it into Art.  She is represented in most cards crowned and sitting on a throne or bench surrounded by nature and holding a scepter and shield. "Be inspired by beauty, feel the energy. Materialize it!", she commands. Her voice is fully confident, authoritative and decisive. She empowers us with the gifts of vitality, inspiration and creation as we embark into the adventure of making Art. When there is will, there is movement. Movement bring in momentum and the soil we plant our seeds is incredibly fertile. It is time to paint! 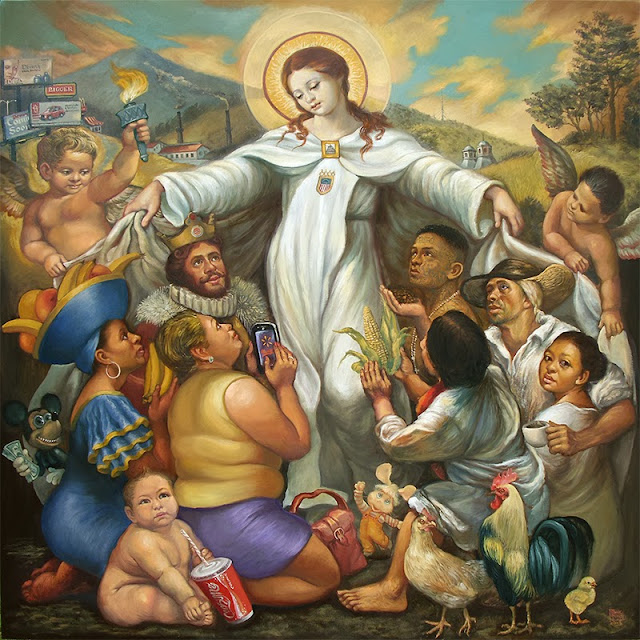 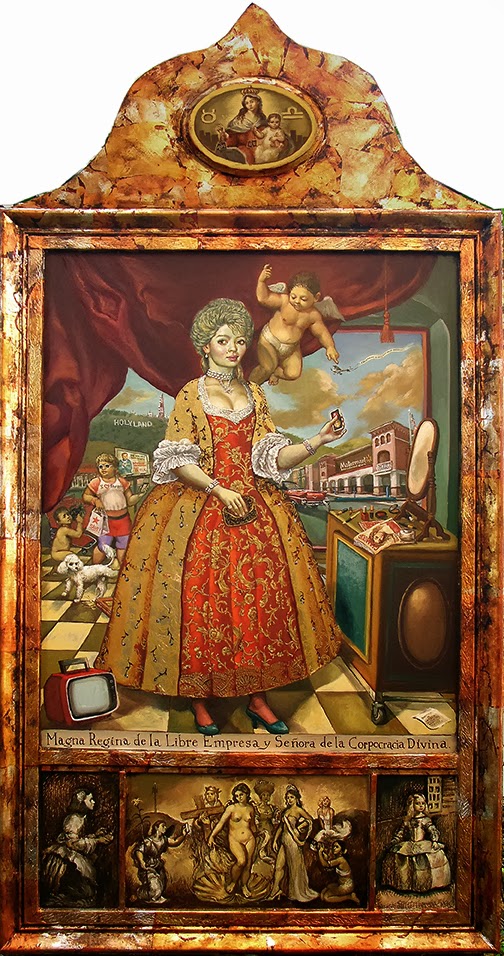 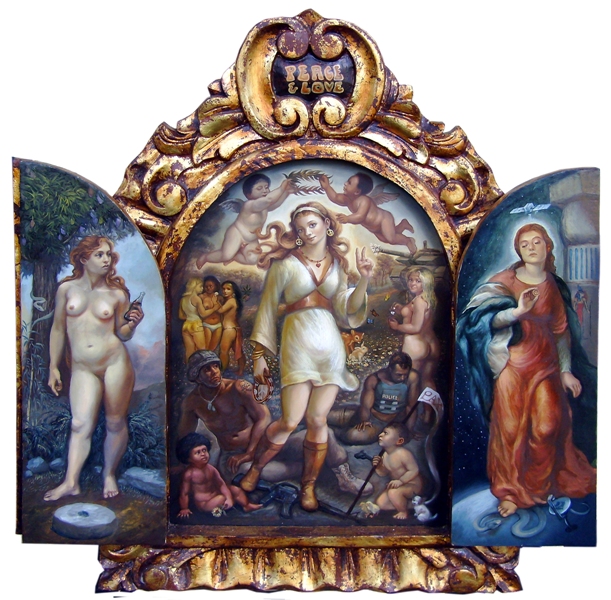 Hope you enjoyed this so far but there's still more to come and I wanted to keep each post as brief as possible. Stay tuned for the next segment of this three part article: Painting Process and Tarot, A Creative Journey, Part 2, where we'll be exploring The Emperor, Pope and The Lovers.
Posted by Unknown at 4:58 AM No comments: