The Chosen People: A Transoceanic Voyage for our Blessed Corporations


Greetings to all and welcome once again to my blog. Recently I've been working on new retablo paintings that besides responding to our times they are based directly on the iconography of Latin American colonial paintings. The reason I do this is simple. In these times it seems as if we are living under a new form of colonialism, an economic colonialism dominated by big banks and transnational corporations. The world is in turmoil as a consequence of this failed neo-liberal economic model. Uprisings in European countries, the Arab spring and the Occupy movement are clear signs of inconformity to the status quo. Artists should not me immune to the world they live in. We are agents of change and can make a difference with our art. 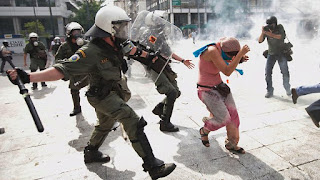 Protest and reactions amid the Greek Economic Crisis 2012

The Spanish American Philosopher George Santayana (1863-1952) once said “Those who cannot remember the past are condemned to repeat it”. We should pay close attention to the implications of his words for we are seeing history repeat itself right as renewed economic challenges unfold in front of us.  Basically the same colonial doctrines from the past are being appropriated and implemented today by powerful economic institutions that rule unquestioned. 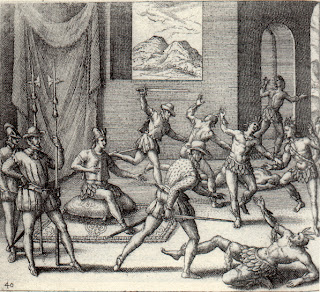 Theodore De Bry Illustration for Bartolome de las Casas:
A Short Account of the Destruction of the Indies

Since the time of Santayana, corporations have gained significant constitutional rights and legal privileges. From the 14th amendment in 1868 to the CitizensUnited ruling of 2010, corporations have expanded their influence and redefined their identity. Today besides enjoying the status of “personhood”, but with far more rights that ordinary citizens, they are also called “The Makers” or “The Job Creators” as if we were talking of venerable figures that deserve great gratitude and respect. This gradual upgrading of their status and total unaccountability moved me to re-think my work in terms of how to represent corporations not just as “people” but as “new saints” in a Neo-Colonial pantheon preaching the holy gospel of the free market enterprise. 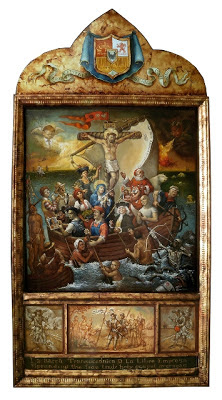 The Chosen People one of my largest retablo paintings is inspired in Latin American Colonial Art. As the title suggests, the painting depicts a group of people in a ship who believe to be chosen by God to fulfill his purpose. The use of the ship as a metaphor or allegory can be traced back to Plato’s “Ship of State”. There are a number of paintings in art history where the allegorical ship is used to describe human society, the church or one’s own soul, from the “Ship of fools” to “The Ark of Salvation”. 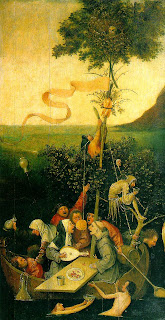 For this painting I studied “Ship of Patience” also known as the “Ship of Christianity” a 17th century engraving by Gerhard Altzenbach that was imported, widely disseminated and copied throughout the Spanish colonies from Mexico to Peru. 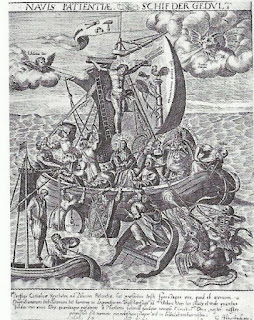 In Altzenbach’s original engraving we are presented with a ship crewed by the Virgin Mary, Saints and a Crucified Christ on a Cross that is also a mast. The composition is loaded with Christian symbolism and was thought by the clergy to be easier for an indigenous audience to understand. 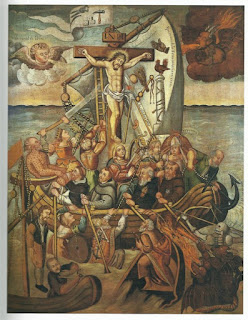 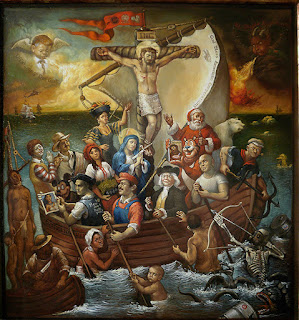 In this contemporary version of the “Ship of Patience” I have chosen other “people” to replace the colonial saints. Since corporations are considered people, why not assume their mascots and iconic characters are as real as anyone else? In this new Odyssey, they encounter some economic perils. In the upper right part of the dark sky a small communist demon blows fire at them.  On the upper left side a corporate angel blows wind to counter attack this effect.  A displeased Christ and Virgin remain on board as they seem to be taken as primary inspiration by the new crew. After all, the Church may be considered as a corporate pioneer by spreading its trademark and products around the globe since colonial times.

Colonial Baroque paintings are often loaded with symbols and icons that may seem quite literal and illustrative at first but also have a hidden esoteric side not easily read just like our current world economy. Although I appropriate imagery from Christian iconography, it is imbued with new meaning relevant to our globalized economy 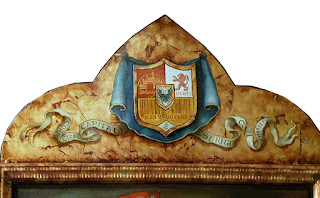 Upper section of The Chosen People (2012)

Allegories like this can serve as devices in order to creatively explain more abstract and difficult matters such as the world economy, the same way Catholic missionaries used paintings to explain the Christian mysteries to the native population of the Americas. 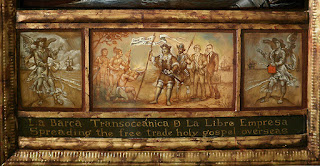 Lower section of The Chosen People (2012)

Overall, the characters may have changed but the strategies are still the same. Below I have included a legend describing some of the most noteworthy characters and elements in this painting. 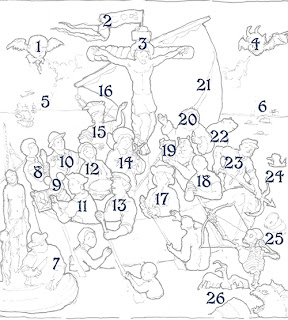 1.       A corporate angel blows while a Latin inscription below reads: “Offshoring Dei Gratia”
2.      A red flag with the World Bank and International Monetary Fund logos along with some dice standing for a speculative world economy.
3.       A crucified Christ serving as a mast  with a sign above that reads “INC” (Incorporated)
4.     A demon with uniform blows fire while an inscription above reads “ “El diablo rojo acecha” (The red devil on the lookout)
5.       On the horizon Spanish caravels signify past colonization.
6.       An offshore oil platform and melting ice in the sea stand for current colonization.
7.       The common people and illegal immigrants or “Takers” as Fox News calls them.
8.       Ronald McDonald one of the “Makers” is praying.
9.       Mickey Mouse showing a “Disneyfied” image of Pocahontas
10.   Don Juan Valdez from The National Coffee Growers of Colombia having a cup of coffee
11.   A Wal-Mart employee wearing a Columbus cap and rowing
12.   Sun Maid from California Raisins holds her basket of grapes which happens to be a symbol of the blood of Christ.
13.   Mario Bros. from Nintendo is also rowing
14.   La Dolorosa or Virgin of sorrows with a sword through her heart
15.   Chiquita formerly known as the United Fruit Company presents the scene
16.   On the side of a sail an inscription reads “Esperanza de la remuneración eterna” (Hope of eternal payment) this line is an unaltered quote from the original piece by Altzenbach.
17.   The Quaker man from the Quaker Oats Company appears to be rowing.
18.   Mr. Clean inspired and rowing.
19.   Tony the tiger shows us his new cereal “Chimpeoos”
20.   Santa Claus holding a bottle of Coca Cola.
21.   On the other side of the sail another inscription reads “God Bless American Corporations”
22.   The Coke Polar bear indifferent to the melting of his own home.
23.   Popeye holds the anchor.
24.   A drowning Big Bird stands for public education and funding
25.    A polluted skeleton with gas mask about to shoot his deadly arrow at the ship.
26.   A Pelican, victim of an oil spill flees from a mutant sea monster. 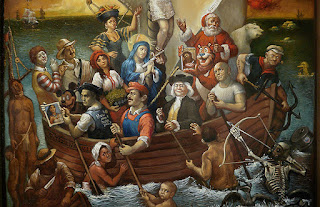 By appropriating the visual vocabulary of colonial art from Latin America and aided by sarcasms and parody I respond to our prevalent economic neo-colonial dilemma. The “Job Creators” ability to outsource and escape economic collapse is a suggested interpretation for this depiction of a transoceanic epic voyage.

This piece will be available at Jane Sauer Gallery in Santa Fe, New Mexico but  will be exhibited for the first time at RedDot Miami Dec 4-9, 2012 along with other new pieces that have not been seen by the public yet.
Posted by Unknown at 1:54 PM No comments: