At last I finished two more paintings today. Tomorrow I should be able to photograph and post them later on my blog. One thing I've noticed: Paintings are taking me much longer to finish. One thing is to start a painting and have it sketched with colors on panel or canvas and even look semi-finished but to really finish the work requires more than that. A painting takes me from one  to two weeks and in some occasions even a month. One of the paintings that I left at Comma Gallery is titled "Allegory to Foreclosure". I consider this piece to be part of the new series as it moves away from religious subject matter. It is as the title suggests an allegory or symbolical narrative representing the current critical situation of the loss of property that can be quite evident not only in Florida but elsewhere. 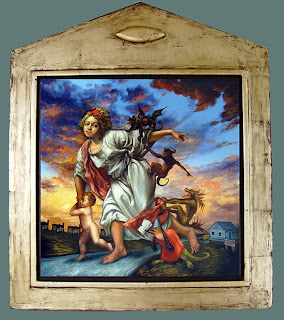 Allegory to Foreclosure Oil on Canvas and

Even though it is not one of my most common studio practices I did use  for this painting a dressed mannequin I made myself with newspaper and junk mail I received when I lived in Altamonte Springs, Florida. This mannequin served as my model for the work, I also took pictures of the beautiful Florida skies and worked from one of the pictures I took. The houses are inspired on the cookie cut houses of Clermont. The demons represent bills, banks, mortgages and other economic pressures that besiege the poor mother and child. These small creatures have been inspired on the work of Hieronimous Bosch. 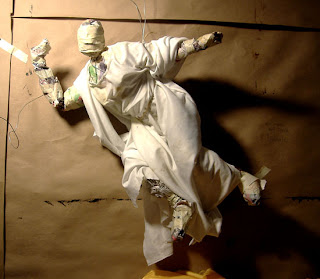 Example of a hand made miniature mannequin

This studio practice has been used since antiquity and  many painters like El Greco, Vermeer, and Josep Sert had their own miniature or even life-size dressed mannequins posing for their paintings. This enabled them to pay more attention and study fabric and draperies and how these intricate patterns of clothing responded to light. It has been widely used by royal portrait artists who painted the King or Queen and then had a wooden mannequin dressed up as the royal character so the person portrayed did not have to sit for long hours while the painter replicated in his painting the effect of jewelry, armor and silk of any kind of richly ornamented clothes. This studio practice is also very useful when one wishes to paint unreal characters such as flying angels or resurrected beings floating over clouds. By using simple materials such as wire, tape, newspaper and fabric a spotlight and some imagination you can recreate your own character and model for your work.