The Legacy of Campeche

The second half of the Eighteenth century was a period of radical changes in the European and in the colonies of the "New World". Politics, Science, society, the economy and the arts all saw important changes. The mid 1700's is the time when the seed of a major revolution in human consciousness was being planted and the age of enlightenment was about to be born. The modern ideas of democracy, freedom and industrialization were about to launch us into a brave new world in the arts, science, politics and society as whole. While Francisco Goya was becoming a successful painter in Madrid and Amadeus Mozart a famous court musician in Salzburg, a young painter named Jose Campeche was actively working in the Spanish colony of Puerto Rico. Born in 1751, a self-taught mulatto artist, Campeche adquired a high level of mastery in the art of painting that soon became legendary in the region. Today he is considered by many as best painter of his time living in the Americas. 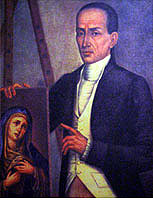 Portrait of Jose Campeche
Commemorating the life and work of Campeche and bringing new light into his work, The Art Museum of Puerto Rico recently opened the exhibition: "Campeche: Myth and reality",  In this exhibit we may find original works from the first known Puerto Rican painter, from his early works to his later more mature works after the influence of Luis Paret, a Spanish court painter who was exiled in the island for a short period. The collection is truly outstanding although it may be disappointing in some respects. For instance some of the works in display are not originals but prints that do not make justice to Campeche's work. But overall the work gathered for this display gives a very good sense of this colonial master's achievements. This temporary exhibition will be open to the public all year. 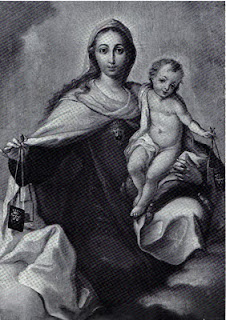 Virgen del Carmen con niño por Jose Campeche
The Art Museum of Puerto Rico has also organized a parallel exhibition titled "Campeche: 200 years later". In this group show, twelve contemporary artists have re-interpreted the work of Campeche in what can be seen as an homage to the master but at the same time bringing up contemporary issues into his work. Rafael Trelles, Carlos Mercado, Garvin Sierra, Rigoberto Quintana, Antonio Martorell, Carlos Irizarry, Jorge Soto Sánchez, Jorge Zeno, Josué Pellot, Lorenzo Homar, Rosa Irigoyen and myself  are the artists participating with our work in this exhibition. We all share in common being contemporary Puerto Rican artists that have a deep admiration for  the work of Jose Campeche.

Sanctus Mater Silicona by Patrick McGrath Muñiz
One of the paintings I am exhibiting at the Museum is titled "Sanctus Mater Silicona". This oil on triptych panel is an appropriation of the many images of Madonna with child  that Jose Campeche would have painted in his time. In this piece as well as in many others I have painted after this one, I have been inspired in the different perceptions of female beauty from colonial times to our own.
In a smaller painting "Allegory to Patriotism" I appropriate a piece from Campeche "Retrato del niño Juan Pantaleon" and imbue it with a new meaning relevant to the current prevailing imperialist pursuits. Since my thesis art project "Iconsumer" in 2006, I have been studying the work of Campeche and other Spanish colonial painters as I see an interesting connection between their times and our own. It is always good to look back at the past and not only learn how these great painters worked but also learn from the times they lived in and how they responded to it. Eventually with much study and reflection one can find many similarities between our time and theirs.  Beyond the obvious colonial paradigm of Puerto Rico, the whole world is subject to  a new colonization by consumerism, the corporate media and Imperialist exploration. As a painter living in a Neo-colonial age I always find much inspiration in painters as Jose Campeche and hope more people re-discover his magnificent work.
"Campeche: 200 year later" will be on display until May, 8th 2011 so try not to miss it. For more information on Museum location and hours visit the Museum homepage at: http://www.mapr.org/Informacion-General/Informacion-al-Visitante.aspx
To see more of Jose Campeche's work online you can visit the ICP National Gallery webpage
If you wish to see more of my work online please visit my official website at www.retabloarts.com
Posted by Unknown at 1:16 PM 2 comments: