Re-connecting to the Past (Part I)


Recently I had an artist talk at Tansey Contemporary in Santa Fe, New Mexico. I talked about how we can learn, connect and have a dialogue with history through contemporary art. I used my work as an example in order to show how artists today can utilize and appropriate narratives from our collective past in order to comment on current socio-political and environmental issues. On this blog I'll share with you some of my insights and experiences from this perspective and summarize some of the points discussed at the gallery. Since there is so much to be said about this and I wish to expand a little further on the discussion, this will require me to divide it into parts. So this is just the beginning... 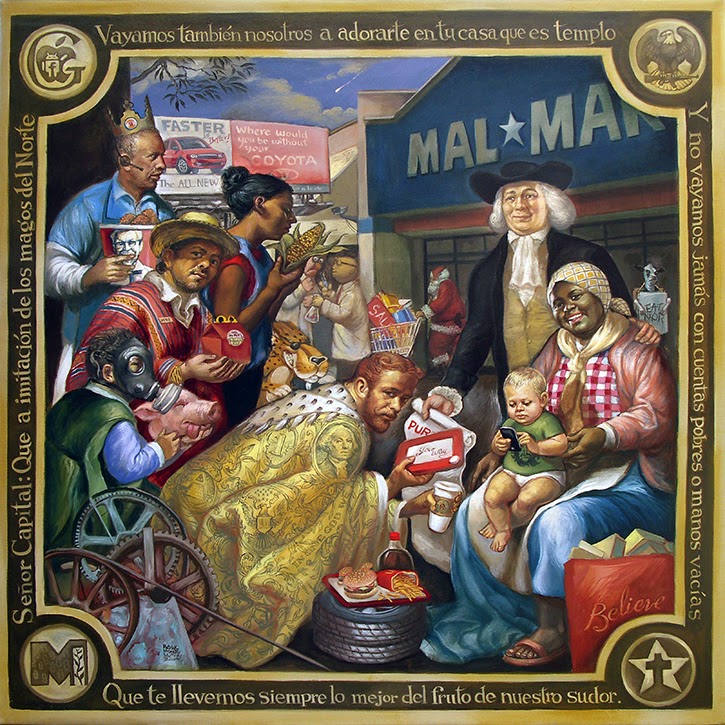 When we travel around the world and specially visit underdeveloped countries that suffer from severe socio- economic inequality, a new sense awakens in our minds. We can no longer be indifferent to the world around us and if our sense of empathy is strong enough, our art and different ways of expressing our concern dramatically change. At least that is what happened to me when I visited Peru in 1998 and had my first hand experience with poverty and injustice in a country that is so rich in history, culture, biodiversity and natural beauties. From that point on, I could not go back to paint beautiful pictures without an irritating sense of guilt. I had a glimpse into the past but also into the future of humanity and this awoke a new inspiration that did not allow me to make art for art sake alone.  Even though I kept creating paintings like this, my personal art journal was filling up with ideas and concerns about the world around me that needed to be channeled somehow. Art had to be about so much more than beautiful landscapes, nudes or portraits. Art has to be about humanity and its place in this planet and in the Cosmos. 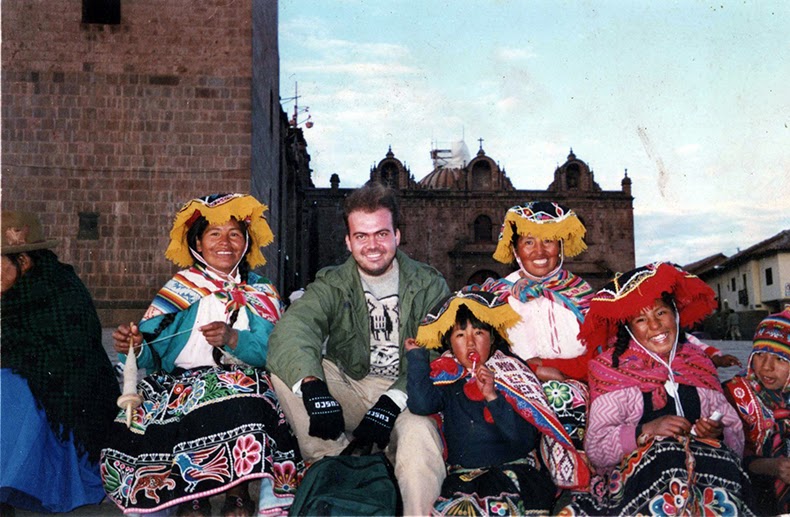 Unfortunately when we look at much of what is done today called “Contemporary Art” it seems to be using a language designed by the elite for the elite. It often takes a view that is reflective of the 1% and not of the rest of us. It seems to have been infected by the corporate virus of market speculation and its prime interest of branding, making lots of money though influential names and mere theater. Even if it’s created with some socio-political or environmental concern in mind, it often seems shallow by its obsessive use of shock value, visual forms and conceptual pretense that ignore or even despise the many while serving the few. 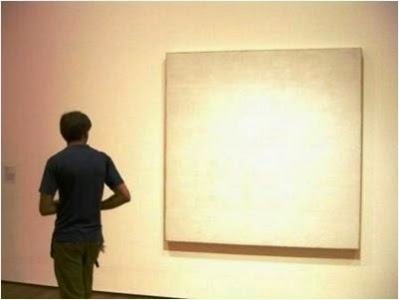 When we look back in time, 30,000 years ago, Paleolithic artists used to make art in their caves that did not serve the interest of a market but rather obey the principles of the natural and spiritual world around them.  With the rise of the first civilizations around 3,500 B.C. artists would start creating art that would obey the laws and beliefs of the monarchs, priests, state and institutionalized religion. Later on with the Christian monotheism and the ruling monarchy, artists spread their art around a world that was starting to become globalized with the European conquest and colonization of the Americas. This art was created in order to serve the interests of the colonizing countries and their religion. With the advent of the Industrial revolution in the 1700’s, artists started to deal with the implications of moving to the city, competing against each other and working with machines and methods of mass reproduction that gradually re-defined the role of the artist. Modern art was born out of the reactionary chaos of revolution and increased speed that compelled artists to re-purpose their art and create an art that would set themselves apart from other artists as well as from the photograph.  The individual mark became the protagonist and hero in every painting. The notion of originality and the self-referentiality became fundamental indicators of the modern art and even to this day. 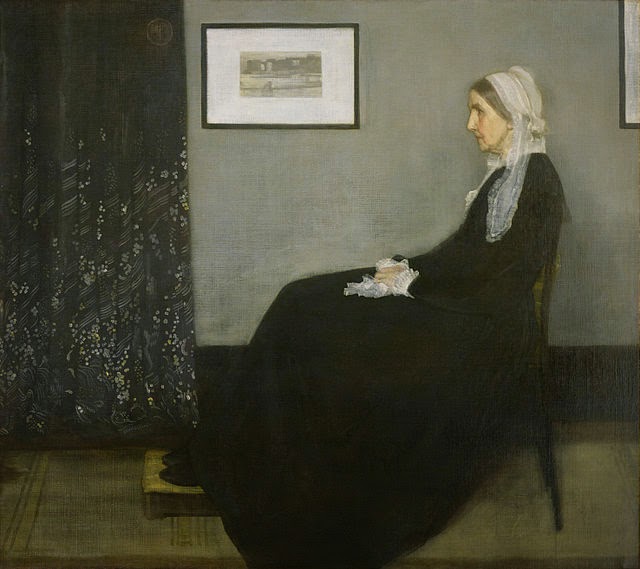 Arrangement in Grey and Black No. 1 By James McNeill Whistler (1871) Oil on Canvas,
Musée d'Orsay, Paris

But we live in different times today. We live in an age of information plagued by a massive environmental crisis that could end our very own existence on this planet. Art should wake up not only to the realities of other peoples in other countries but to history itself. Contemporary art should be able to look back in time and see beyond its modern progenitors and to its distant ancestors and learn from the whole human experience. We have the right technology and right tools to expand our knowledge and understanding of our world and it’s past.  There is no excuse to remain ignorant and conformist as artists and as planetary citizens. And it is not just about us and our past but think about the environment, the planet and its history. Just think about it, we have been walking around as a species for just 200,000 years on a planet that is 4.5 billion years old and seen 5 mass extinctions. We are really an insignificant part of the equation that only relatively recently has made a significant change to this world. There are so many questions to address, so many issues to study and explore with our arts, culture and sciences, that there is simply no more time to waste. While self-exploration is good, the world is much bigger and older than we think. 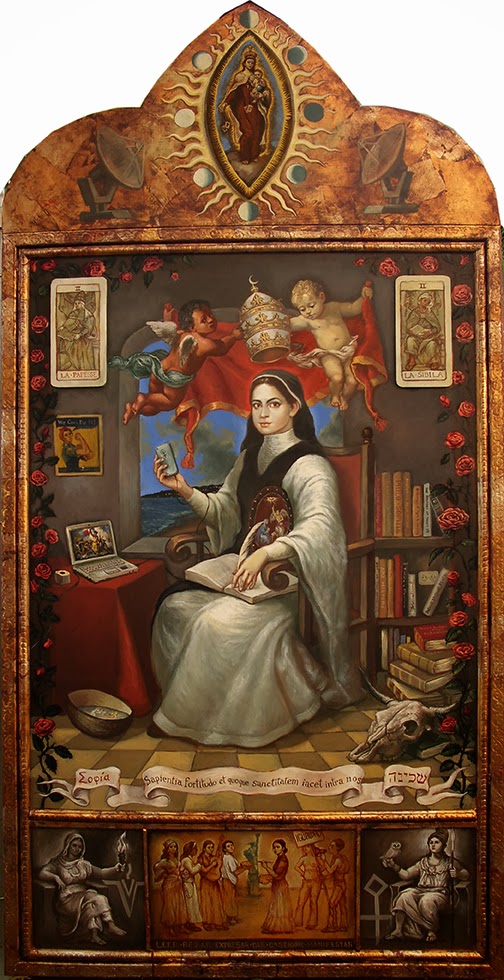 La Papisa (2013) Oil and metal leaf on panel 24" x 47" by Patrick McGrath Muñiz.
Available at Tansey Contemporary
Posted by Unknown at 10:53 AM No comments: