Apollo and the Muses in an Archetypal context. 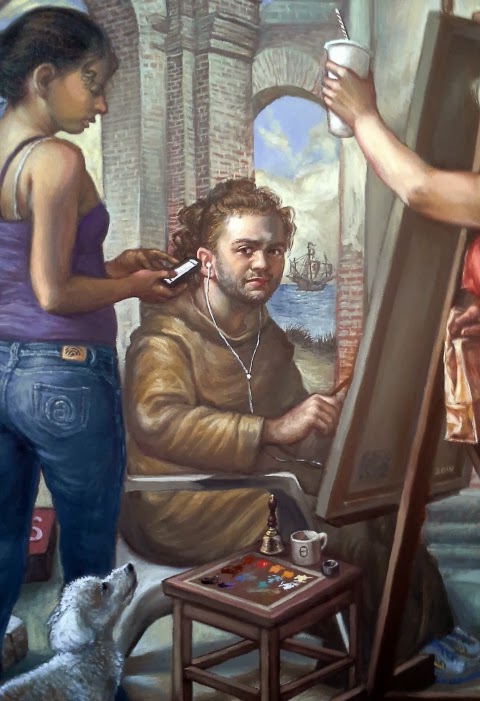 On my last blog post I started to explore the subject of the Muses and how they are actively participating in the creative act. Now it would be good to get to know a little more about each one of the nine Muses, their archetypal functions and how they may influence particular aspects of our art. These re-interpretations derive from a study of Archetypal Astrology as well as Classical Mythology. Although the number of Muses varies from source to source, the tradition has held on to the number 9 plus Apollo, the leader of the Muses making 10 in the end. There seems to be an interesting correspondence between them and the ten principal archetypes discussed in Cosmos and Psyche by Richard Tarnas. Just as Tarnas brings back these mythical planetary figures into a contemporary world perspective, I would like to explore the Muses in both a personal and transpersonal context. Interestingly the Muses posses a concrete form as asteroids and already have an astrological significance in themselves. Aware of this I still believe they are reflected in the ten major planetary archetypes as well. This is just another approach in order to understand these goddesses of inspiration. 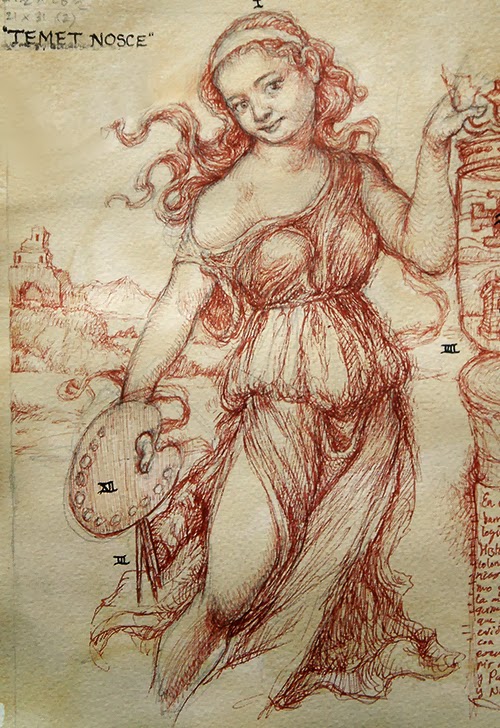 Calliope
The "fair voice" Muse of epic poetry, inspiration for the oldest works of Western Literature, the Illiad and the Odyssey (Homer's Muse) and mother of Orpheus. She is the eldest of the Muses who also bestowed eloquence to kings and princes. Calliope is the daughter of Zeus and Mnemosyne (Memory). Her wisdom and centrality among the nine Muses often recalls the image of Mother Earth. Once thought to be the center of the Universe, our planet still is the source of all life as we know it. When it comes to artistic creations, Calliope is the muse who tells the epic story of humanity while nurturing our internal artist child. She guides Orpheus to create the most beautiful music in the world, music that not only soothes his fellow humans but all animals and plants, Gaia's children. She blesses all artists, musicians, writers, researches, astrologers, who are sincere as children in their art and are devoted to the creation of epic works. 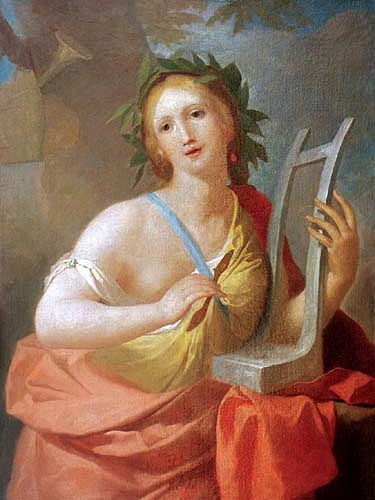 Clio
The 'renown' muse of History, mother of Hyacinth, usually depicted holding a scroll or tablet and pen. Clio is also known as 'The Proclaimer'. She oversees historians, teachers, historical novelists and narrative painters. Clio helps us understand that history is not linear but cyclical, involving life, death and rebirth. History is the story of a never ending human evolution and constant transformation on every level (social, economic, political, environmental and cultural). These qualities have an interesting resemblance with the astrological Pluto, who rules over death, destruction, decay but also regeneration and rejuvenation, all vital ingredients in the cyclic art of history. G. Santayana once said “Those who cannot remember their past are condemned to repeat it". History can be personal as well as collective and if we can learn from both and find the connections, our purpose in life and art can attain a higher ground. Clio reminds us of the importance of history in order to make art that is meaningful and relevant not only to our own time but to all times. 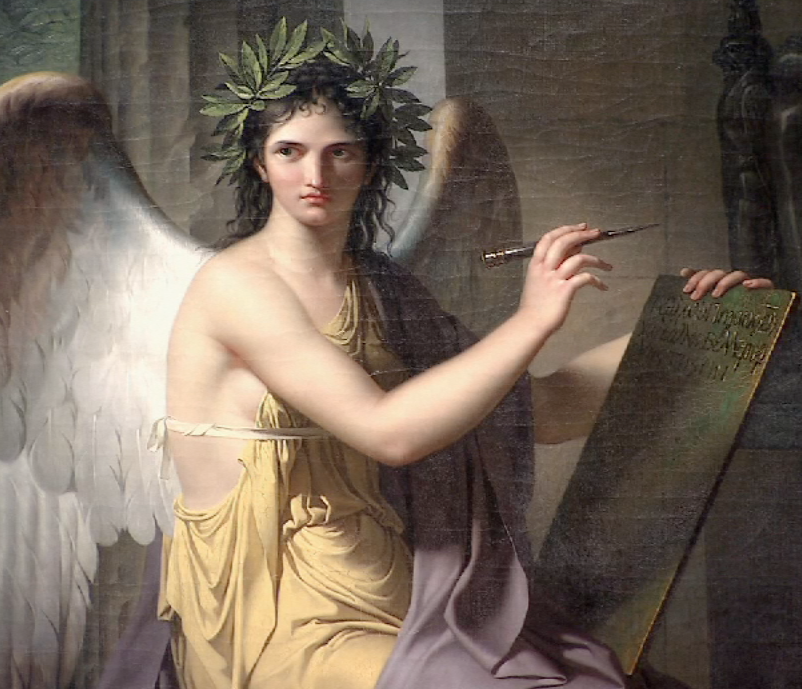 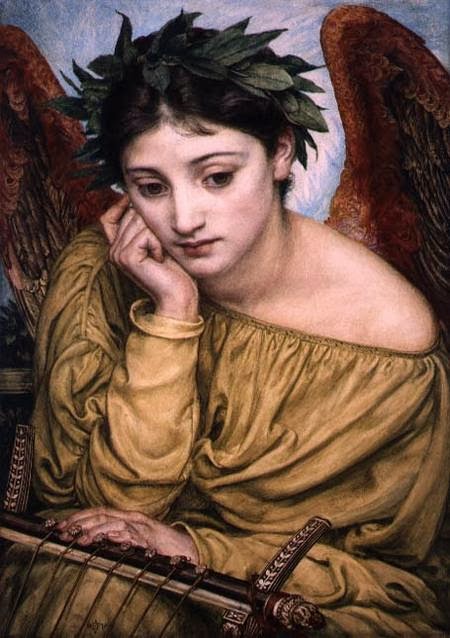 Euterpe
Her name means 'gladness' or 'giver of delight' (flute playing) and she is the Muse of music and elegiac poetry. Most artists that work with music knows how much easier it is to make art while listening to beautiful music. This is precisely the realm of Euterpe, Muse of all music and musicians. The English word for music derives from the words Musica in Latin and "Mousike techne" (art of the Muses) in Greek. It is also the origin of the term "Muse". Before Apollo became the god of music, Mercury/Hermes invented the lyre out of a tortoise shell and he was also said to be the teacher of Amphion, the first harpist. In astrology Mercury is the ruler of communications, trade, travel, signs, symbols, notes, reading and writing. Similarities between Euterpe and astrological Mercury may not be apparent immediately but when one thinks of the creation of music and how it is transmitted, we can see how Mercury plays an important role in its composition and dissemination. I always find it very inspiring to paint with music in the background. From Ancient, to Classical or New Age to New Wave, Pop and Folk, beautiful music comes in so many different languages, and different expressions and it probes highly inspirational while working. 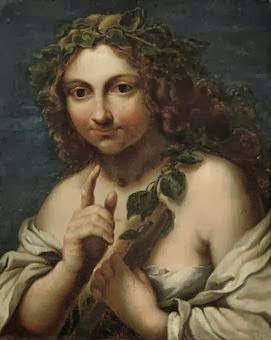 Melpomene
The 'singing' Muse of tragedy is usually represented with a tragic mask. The Muse that brings inspiration through feelings of loss, pain and tragedy, she shares territory with Saturn, the planet/god of suffering, and endurance through hardships and discipline. This type of energy relates with the satisfaction we get out of hard labor and strenuous work but also by sadness and feelings of melancholy which can also be inspiring. Well structured work schedules and appropriate setting that gets us to  work hard, will be well suited for Melpomene. As the saying goes: "No pain no gain". 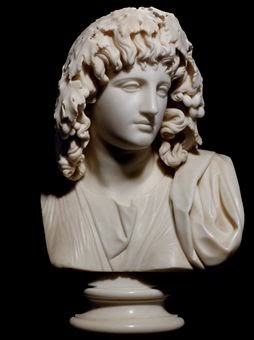 Polyhymnia
Polyhymnia means 'Many songs' and she is the Muse of sacred hymns, dance, agriculture and pantomime. She is also one of the most quiet and serious of the Muses. Polyhymnia the muse of many songs and many gods is uniquely spiritual and solemn in her movements. She comes to us in our quietest moments, when we are at peace with the world and let our soul drift and float in the infinite ocean of the cosmic creation. Just like Neptune, the planet of illusion, holistic visions of Utopia and transcendence, Polyhymnia embraces all channels of understanding and becomes all and one at the same time. Incense, prayer and quiet environments attract her presence. As an angel of God, she elevates our soul and aids us in creating art that is sacred and ethereal. She blesses poets, gardeners, healers, mystics, painters and all artists and musicians devoted to creating art that evokes the Divine. 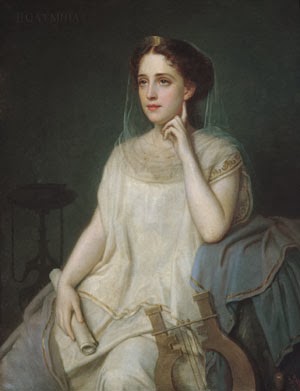 Terpsichore
Terpsichore is 'Joy in the dance', the Muse of dance and lyric poetry and also said to be the mother of the Sirens. Professional dancers, athletes and fitness trainers understand the creative beauty of the human body and this is precisely the area of Terpsichore. Physical exercise is as vital as mental exercise when it comes to creativity. A healthy body that is well balanced and harmonious will become the appropriate temple a healthy creative spirit. As a painter I find that the study of human anatomy should not only be about drawing the human figure but also involve becoming physical and developing physical intelligence and grace. As one of the seven Da Vincian principles: “Corporalita” proposes an art that requires the cultivation of grace, ambidexterity, fitness, and poise. In archetypal terms, Mars, the planet of passion, discipline, determination and physical impulse immediately comes to mind. 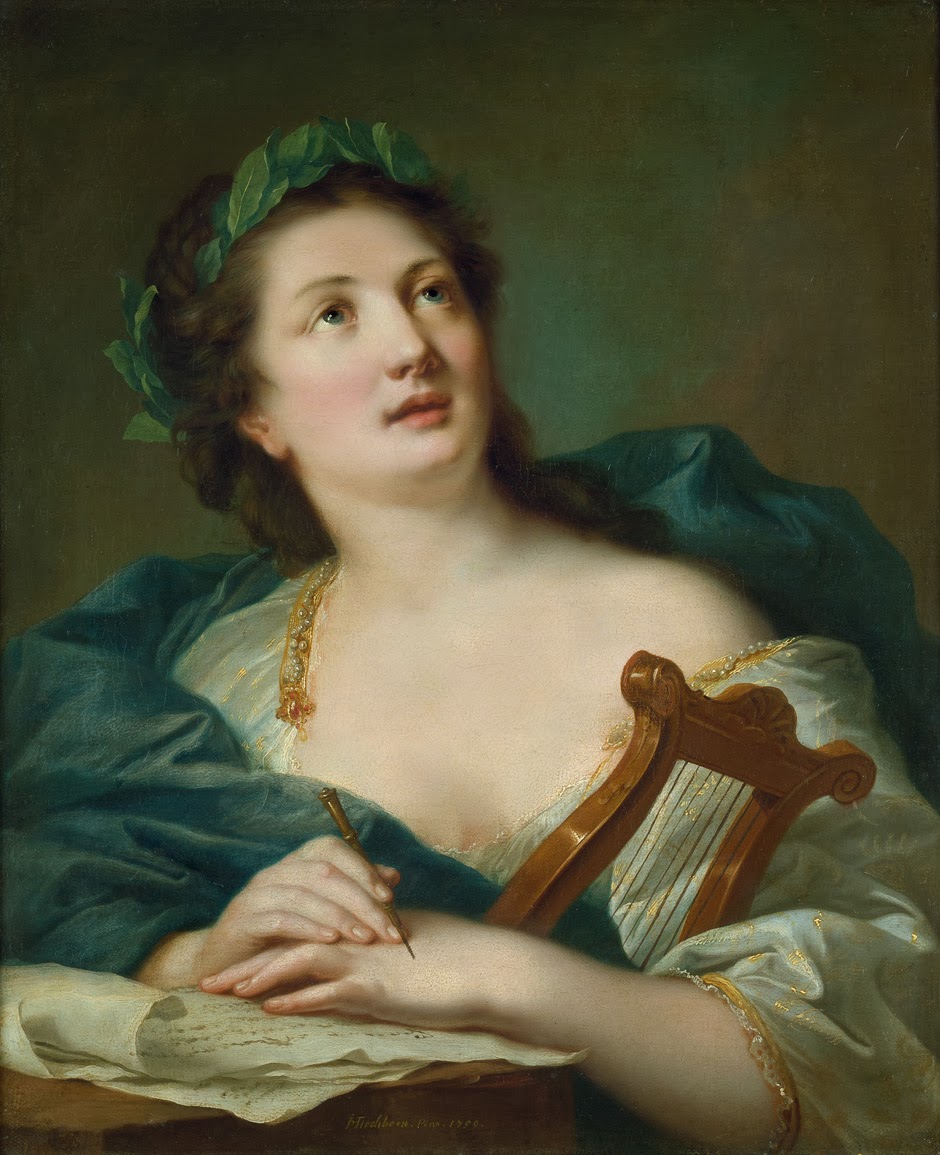 Thalia
Her name means has several meanings from 'Abundance’, ‘to bloom’ to ‘good cheer' and she is the Muse of Comedy.. Thalia is the most jovial of all Muses, reason why she becomes closely related to Jupiter, "The Greater Benefic" that brings abundance, growth, optimism and a good supply of laughter. Her place among the nine Muses shows us the importance of a good sense of humor in any art form and that we should not take ourselves too seriously all the time. There are plenty of references to be inspired by which can be found mostly in contemporary pop culture.  TV personalities, comedians and artists who use parody and satire in their creations are blessed by this goddess. Every once in a while it does well to lighten up, laugh and have fun right before or while creating an artwork. 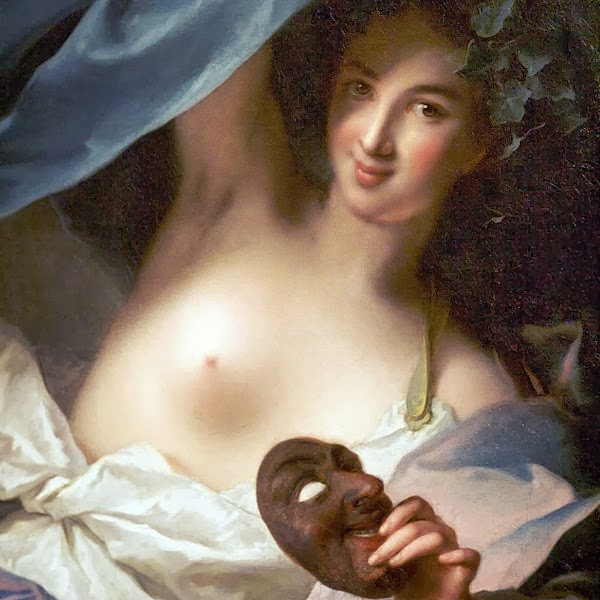 Urania
The muse of Astronomy/Astrology and therefore could foretell the future by the placement of the stars. Being associated with Uranus, the planet that rules not only astrology but scientific revolution, social upheaval, sudden breakthroughs, technology and modernity, Promethean in nature, Urania can be called the Muse for contemporary artists, astrologers, psychic and mystics. Techno/Synth Pop music that is often fasted paced and futuristic is quite appropriate to invoke her. Urania loves the new, innovative and future driven creations. That is why she points up to the starry skies and reminds us where we truly come from. 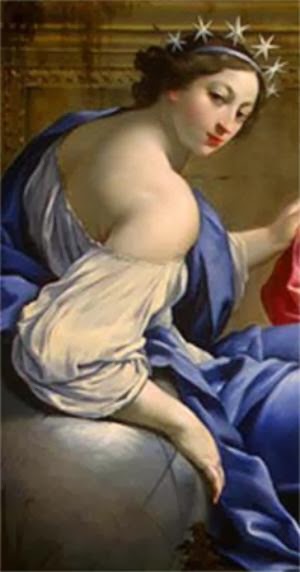 Apollo
Olympian god of Music, the Arts and Prophecy, he is the leader of the Muses. Apollo, the Sun god reminds us that as our solar system has a bright core from which everything else orbits, in the same way, our motives, dreams and creations orbit our creative spirit, our center. Every one of us carries within an internal Sun that illuminates and gives life to our art. We just have to become aware of it and let it shine. As the planets orbit around our Sun, the Muses revolve around our Soul influencing and inspiring us to create art that engages more than one aspect in this archetypal Cosmos. 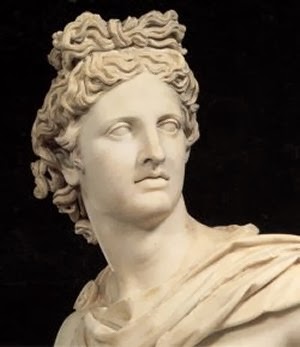 Posted by Unknown at 4:22 AM No comments: