Color in the 18th century from Goya to Campeche

Here's a brief analysis I have been working on in relation to the pigments used by artists in the late eighteenth century from Spain to Puerto Rico. The two painting palettes I have been studying are those of Jose Campeche from Puerto Rico and Francisco Goya from Spain. Both were contemporaries but did not have any contact with each other. While Campeche painted virgins, saints and portraits for rich patrons, Goya did these plus paintings with loaded with social and political commentary, macabre, witchcraft content. It would be quite unfair to compare creative output and achivement between these two painters but there is an interesting link to be explored between these two painters: Color. 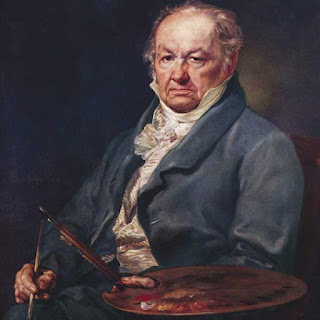 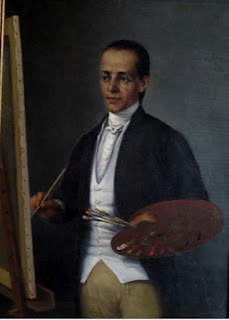 Portrait of Campeche by Francisco Oller
Both of these paintings done by other artists after Goya and Campeche catch a glimpse at their palettes. From these and from restoration done of their work we can now now what pigments they used in the oil paintings. As you can see neither of these artists used a closed, scale controlled palette. Though you can say both had a limited color palette which included most if not all earth colors known in their time. 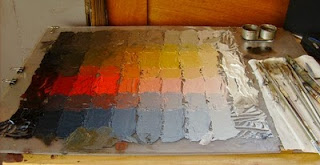 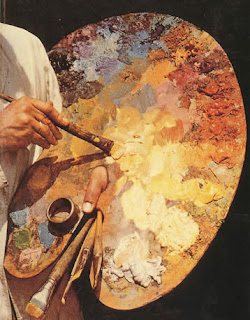 Open Palette
It is not difficult to find a number of web sources listing the colors used by Goya. There is a interesting website I found that sells Natural Pigments.Their list as most others is based on  the research of Frederic Schmid in his painting treatise The Practice of Painting (1948). The colors used by Goya according to Schmid are as follows:

1. White Lead (Flake White)
2. Naples Yellow
3. Yellow Ochre
4. Raw Umber
5. Burnt Umber
6. Burnt Sienna
7. Venetian Red
8. Brown Ochre
9. Light Red
10. Vermilion
11.Crimson Lake
12.Green Earth (Terre Verte)
13. Cobalt Blue
14. Ivory Black
In the case of Campeche, Lydia A. Quiquley in "Jose Campeche and his time" gives a list of the pigments discovered in the microanalytical examination of several of his works. The list provided is as follows:
1. White Lead
2. Yellow Ochre
3. Iron Earth Yellow (Gold Ochre or Transparent Yellow Ochre)
4. Raw Sienna
5. Burnt Sienna
6-7. Iron Oxide Earth Brown in different states of hydration (Raw Umber & Burnt Sienna)
8. Madder (Rose Madder)
9. Vermilion
10. Prussian Blue
11. Bone Black
12. Charcoal Black
A painting palette that emulates the coloring of Spanish Colonial paintings of the late eighteenth century should include the colors of either of these two lists or a combination of both. A modern day approach to accomplishing this and my own color palette would be the following in this order:
1. Lead White (or Titanium white if you want to keep away from heavy metals)
2. Naples Yellow
3. Yellow Ochre Light
4. Gold Ochre
4. Raw Sienna
5. Burnt Sienna
6. Burnt Umber
7. Raw Umber
8. Cadmium Red Light (Substituting Vermilion)
9.Rose Madder, Alizarim Crimson or  my personal favorite: Gamblin'sPink Brown
10. Cobalt Blue ( a light blue)
11. Prussian Blue (a deep dark blue)
12. Ivory Black
As part of my research I have been studying paintings and retablos of the Spanish Colonial Americas, particularly those of the time of Campeche and Goya because I find it that quite relevant and similar to our own in many ways. Many of the socio-economic dilemmas experimented by our globalized world were experienced by the Colonies and there seemed to be an inevitable revolution about to explode not only in the Americas but in Europe. We today find ourselves in a very similar context with a Neo-Colonial world economy about to collapse. By quoting the colors and appearance of the paintings of the colonial period I am commenting on the present condition of global cultural and economic colonization.
Posted by Unknown at 3:31 PM No comments: