"There is no great genius without some touch of madness".

Hello Everyone! Here I am again this time sharing with you some insights on the first archetype that shows up in the Tarot: The fool. I am currently exploring the possibilities of this archetype in art and working with it in one of my paintings. As I mentioned in my previous article, an archetype is a universal energy and we can tune in to it and manifest it through narrative painting or any other art form. 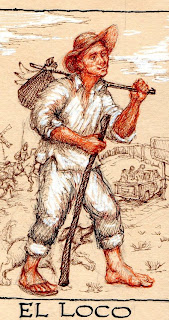 El Loco (2011) Ink on paper 3" x 5.5" from my "Neo-Colonial" Tarot deck I am working on.
It is often said there is a thin line between insanity and the creative genius. This is revealing of the archetype of the "fool", "loco" or "madman".  Contrary to the bad rap society this guy has received from our society, there is much wisdom to be found in him. "Without his unpredictable sense of humor, curiosity, spontaneity and random creative spirit, there would be no originality in the arts, or innovation in science and technology. Everything would be square and boring. 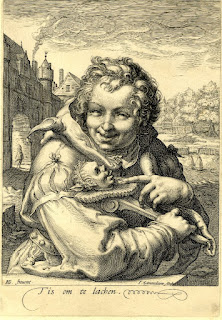 Greeat artists and innovators come up with great ideas and original creations but as soon as these become institutionalized and harnessed by corporate interests they become sterile predictable products that follow the market and are guided solely by numbers and not by intuition. Plenty examples of this could be found in the music industry but also in the art world. 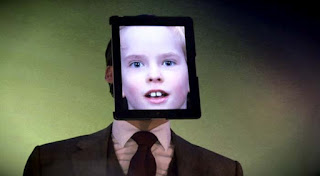 An artist is someone who is often misunderstood by the masses. Perhaps that is why "the fool" is the only card in the Tarot that has no number and  is represented under a "Zero" (0) indicating no value, outside measurement and  at the same time an egg-like embryonic state full of potential. His actions are organic and break all the rules. This archetype is the embodiment of imagination and creativity. 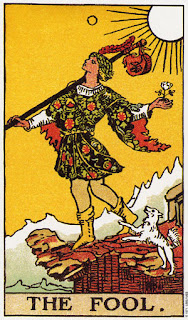 The Fool (1909) from the Rider Waite Tarot deck

In French he would be called “Le Mat” and in Italian “Il Matto” (the madman)I like to call him "El Loco" instead of "The Fool" for a very good reason. In the English language, fool or foolish is usually used in a pejorative sense while "loco" or "locura" in Spanish carry a quixotic connotation with the possibility of being a force for good. "De artista, poeta y loco todos tenemos un poco" (We all carry an artist, poet and madman in us) is a popular saying in Puerto Rico and Latin America implying that madness is one important ingredient for creativity. 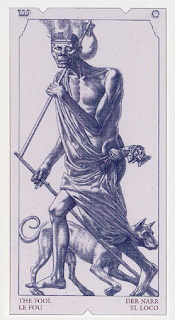 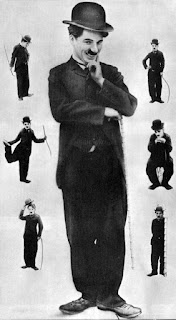 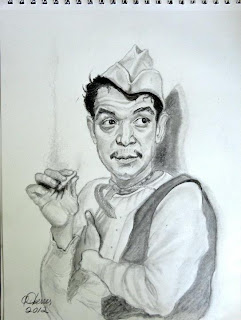 
Playful “childlike” behavior, anarchy, irreverent energy, primate vitality, Self-indulgence,  day-dreaming, idyllic, Utopian seeking, freedom loving, mischief, trickster cleverness, a sense of humor, joy, fun, liberation, novelty, originality and simply being “different” are just some of the attributes we can point out about “El Loco”.  All of us carry this archetype within us but it is only fully enacted by some and more evident in artists, performers, clowns, comedians and children. 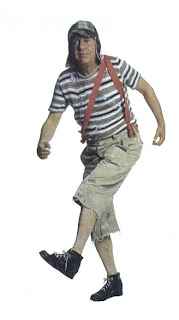 There are plenty of examples in art history and Latin American popular culture I could think of when it comes to this particular archetype.  Here are a just a few more "Locos con sus Locuras" that seem to fit well as good examples of  "Madman/trickster" archetype: 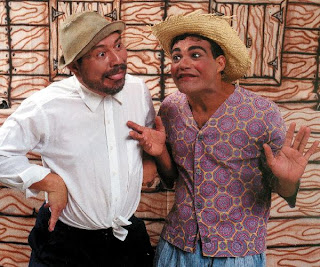 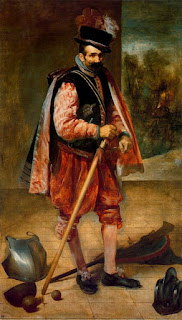 
There are some Christian Saints from the Catholic Pantheon that seem to resemble the image depicted in the “the fool” from the Tarot.  These have been my inspiration to create my own version of "El Loco" in retablo paintings. Notice that Saint Roch and Saint Lazarus see to be travelling while carrying a staff or crutches and are accompanied by a canine guardian loyal friend who seems to be working the role of a spiritual healer, protector and guide. 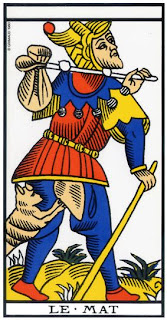 Le Mat (The Fool/Loco) from the Tarot of Marseille 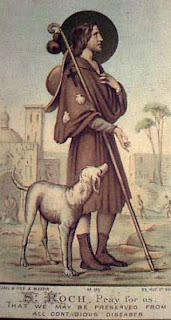 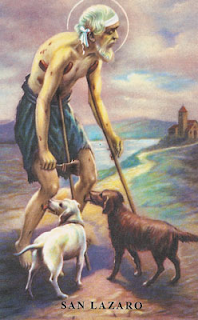 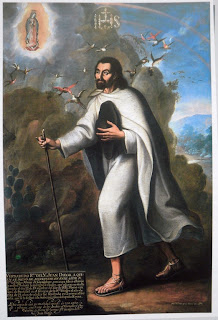 Portrait of Venerable of Juan Diego (1751) Oil on Canvas by Miguel Cabrera
In the Colonial/Neo-Colonial narrative, "El Loco" can be identified as one who does not follow the established laws or conventions and disobeys the socio-political boundaries set by the Colonial power. He may seem foolish to his colonial society. He is mocked and laughed at by the upper classes and is quite entertaining to the Viceroy or King and seen as a clown or court jester. In the case of someone like Indian Juan Diego, he was not believed at first by the Church authority and Colonial powers for his report of the Virgin of Guadalupe. The archbishop Juan of Zumarraga to whom supposedly Juan Diego showed the tilma with the image of Guadalupe, does not even mention Juan Diego in his accounts. (I should mention there is still much debate and skepticism on the credibility of the whole story to begin with). 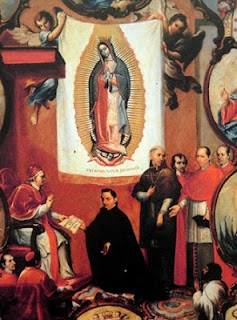 In this colonial painting we can see the archbishop Zumarraga and other Church figures procaiming the validity of the aparition of the Virgin of Guadalupe to the Pope . Poor Juan Diego is depicted as a "Zero" a "nobody", ignored and almost kept out of the picture on the lower right section of the composition, reflecting on racial colonial prejudices that still define the Americas today. The Indigenous saint is seen as someone out of line with the colonial conventions very much like our much discriminated "Loco" archetype. 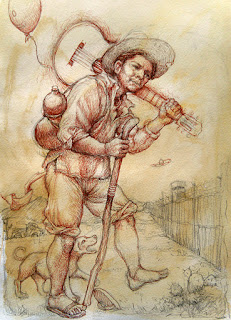 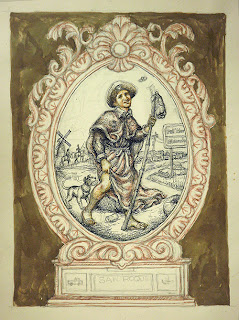 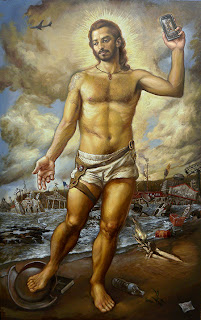 I would like to end with a quote by William Shakespeare from "A Midsummer Night's Dream that goes like this "Lovers and madmen have such seething dreams and shaping fantasies, that apprehend more than cool reason ever comprehends."

Stay tuned for my next arcticle that will be about the next archetype : " El Mago" (The Magician)