The Mother Archetype in Art, Tarot and Astrology: Part 2 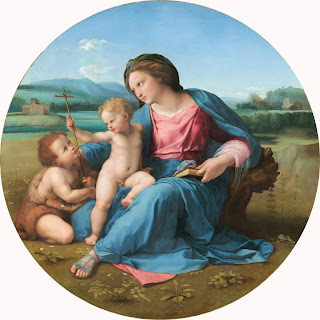 Following up on the Mother Archetype present in the history of art, in the Tarot cards and in Astrology, I have included some additional material and artwork for the second part of this article that will evoke the archetype that is expressed in the person of our mother. Personally I feel it is of vital importance to recognize the mother archetype in order to adopt an environmentally sustainable culture. Without the reverence and veneration of a "Sacred Mother Earth" humanity will simply keep destroying its own home and future leading to a path of eventual mass extintion. 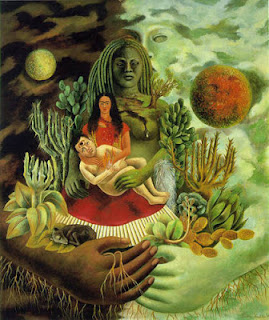 The Love Embrace of the Universe, the Earth (Mexico), Diego, Me and Señor Xólotl by Frida Kahlo

Maternity, By Vanessa Arandt. To view more work from this artist visit her website

From Mother Earth to the human mother the associations and ramifications of the mother archetype seem to encompass and hold everything  in the microcosm and macrocosm together. According to Michael Tsarion in his presentation Astro-Theology and Sidereal Mythology, the words: MATER/MATERNITY/MATTER/MATERIALITY/MATRIX/MATHEMATICS/MARRIAGE/MATE seem to share the same etymological source. In any mythology or world religion where you find a beautiful, loving, protective goddess, you are encountered with the same essential archetype, the archetype that gives birth to all other archetypes.

Image of Isis and Horus from Roman Catacombs

In Astrology she is expressed in the Moon (Diana/Artemis), Venus (Aphrodite) and the Earth (Gaia), which are all considered female entities. But the planet Neptune as well as Eris and the four asteroid goddesses Juno, Ceres, Pallas and Vesta share female qualities and potential motherly attributes as well. 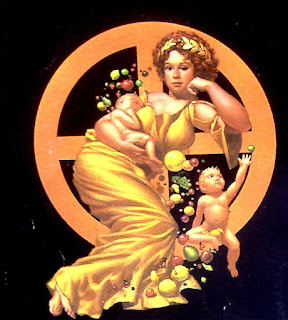 As Venus, she rules the Zodiac signs of Taurus and Libra. The sign of Virgo is the Virgin holding a shaft of wheat, which is associated with the ancient motherly grain goddess Demeter. Diametrically opposed we find the sign of Pisces which is ruled by Neptune. Pisces symbolized by two fish (Considered to be Venus and Eros) is also a prominent symbol of Christ. As a matter of fact, the first official logo of Christianity wasn't a Cross but a fish.. Ichthus( ΙΧΘΥΣ) is the Hellenistic Greek word for fish and it was used by the early Christians as an acronym for "Ίησοῦς Χριστός, Θεοῦ Υἱός, Σωτήρ", (Iēsous Christos, Theou Yios, Sōtēr), which translates into English as "Jesus Christ, God's Son, Savior".

Virgo and its complimentary sign Pisces, therefore represent the Virgin Mary with Baby Jesus.  The Twelve stars forming a halo around her represent the 12 constellations. 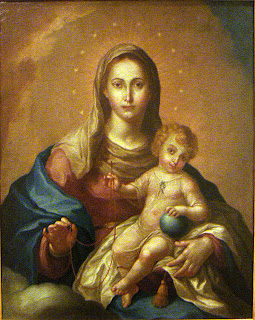 In Art, the mother archetype is easily spotted in the allegorical depiction of Charity as a loving mother caring not only for her own children but for others as well. Charity along with faith and hope are the three theological virtues of the Catholic Church. 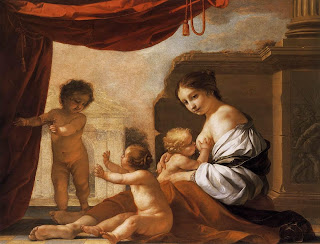 Allegory to Charity by Jacques Blanchard (1637) 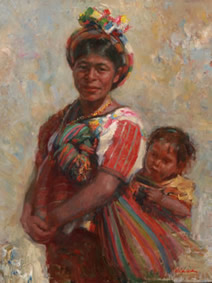 In the Tarot, one can consider the Arcanas 2,3 17,18 and 21: The High Priestess, Empress, The Star, The Moon and The World. All of these cards contain images that represent the Sacred Mother Goddess in various aspects. 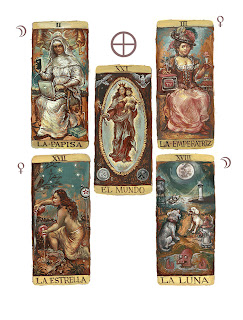 Many mother head goddesses from the ancient Mediterranean cultures like Artemis, Astarte, Celeste, Ceres, Cybele, Demeter, Diana, Ishtar, Isis and Selene are still perpetuated in the Christian Madonna. Stephen Benko in "The Virgin Goddess" proposes: "that there is a direct line, unbroken and clearly discernible, from the goddess-cults of the ancients to the reverence paid and eventually the cult accorded to the Virgin Mary.” 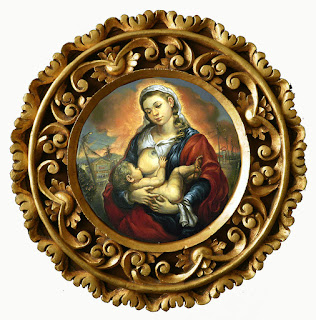 The Association of the sacred feminine with nature runs deep in history and world cultures, from the Mesopotamian Inanna  Ishtar to the Judeo-Christian Eve and even in nature itself, women seem to be more closely linked to nature than men. From the Moon Cycles, to gestation, birth, nourishment to magical intuition and her life giving capacity, the mother archetype in all her forms and at many levels  deserves not only to be studied but revered and honored in contemporary art. 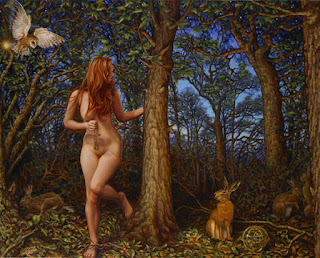 Twilight by Susannah Martin. To see more of her work, visit her website

Brazilian Liberation theologian Leonardo Boff in his book Ecology, describes Earth "not as a container of life but as life itself, a living super organism, Gaia. She is indeed what the primitive cultures and mystics always have called, the Great Good Mother, Nana and Pacha Mama". 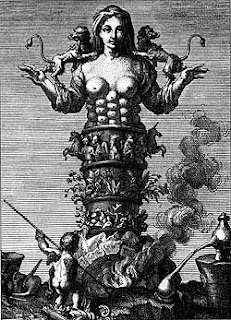 With this thought in mind, we should consider the possibility of a renewal of religion revering our Earth as the greatest embodiment of the Sacred Mother Archetype. Updating and re-interpreting this ancient archetype in all art forms should be the task of any artist today who is seriously concerned with global ecological issues. That is precisely one of  the many projects which I am currently working on.

Posted by Unknown at 9:21 PM No comments: