Finding inspiration in the Book of Revelations 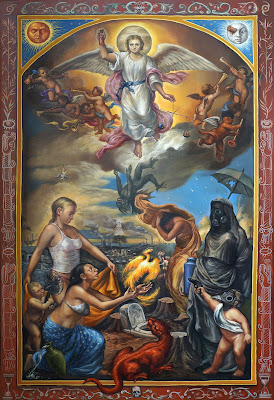 The last judgment as well as other apocalyptic narratives found in the book of Revelations were popular themes in European Renaissance and Baroque painting. There is also a well known depiction of the last judgment on the Tarot, the Major Arcana 20. On this new interpretation titled Geo Iudidium (Geo Judgement) the four seasons are depicted as four allegorical female figures responding to climate change as the story unfolds in a vertical sequence with a heavenly group above and an earthly group below. 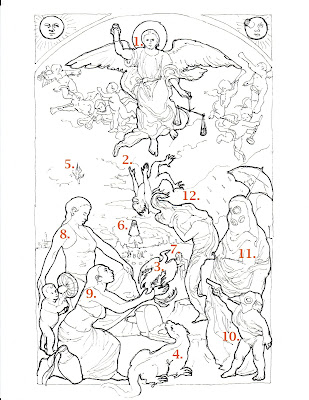 1.  Above them stepping on a cloud,  a representation of St. Michael the archangel raises an insecticide on his right hand (replacing of the traditional sword) and the scales on his lowered left hand carry a blue globe representing Earth and humanity . As a halo, Venus is the planet of love and beauty and Earth's twin sister turned into hell by extreme global warming. Around St. Michael, seven putti (angels) with trumpets hover across the sky.
2. A black devil falls to the Earth below.
3. A Fiery Phoenix rising from the ashes of destruction symbolizes rebirth and a renewed cycle.
4. In Alchemy the salamander although a water creature was held to be a solar creature able to consume flames and cool down any fire. It is a symbol of spiritual determination, survival and renewal.
5. From Greek Mythology, Icarus falls from the sky. In this given context, it links humanity's hubris with the devil's pride and eventual fall from glory.
6. A mother-like deity emerges from the last tree on Earth, a life sustaining symbol of hope and nurture revered by survivors below. Twelve stones enveloping the group symbolize the twelve months of the year and therefore time.  Oil refineries in a barren landscape pollute the air.
7. A reference to art history from Goya's Saturn devouring his children alludes to humanity's voracious appetite and self destructive impulse based on a misleading notion of self-preservation.
8.  Aestas (Summer) extends her orange towel while an accompanying infant points a fan towards her.
9. Ver (Spring) kneels down and releases or tries to catch the Phoenix while a green jar spills some water.
10. A masked infant below points a gun at the Phoenix. The mask is reminiscent to those worn by medieval plague doctors. The image symbolizes misguided aims and false cures.
11. Hiems (Winter) wearing a gas mask, holds a broken umbrella and funeral vase.  At the far right, in the background, a reference to The Lord of the Rings, Eye of Sauron can be seen.
12. Autumnus (Autum) covers herself from the wind next to some tree stumps and a buried toilet seat. A meteor shower falls from the sky.
The 4 serpents (four cardinal directions, elements, the material plane) in the frame symbolize the Earth's ability for renewal. The Sun and the Moon are witnesses as the consequences of humanity's mindless actions and inactions concerning the planet's wellbeing bring out the final verdict and Geo Judgment.
Posted by Unknown at 5:08 PM No comments: