Colonial Portraits for Our Times 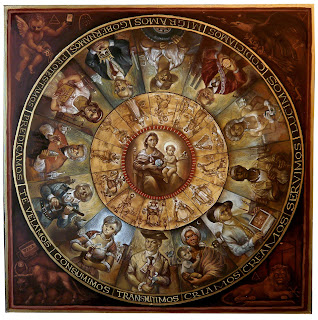 It is with great satisfaction that I present my most recent work Mcolonial Citizens at Petrus Gallery in the city of San Juan, Puerto Rico from February 9 to th 29th of 2012. This work comprises a series of 12 oil paintings on retablos, 2 wood panel triptychs and a larger rotating centerpiece.  These are inspired in “casta” paintings, colonial engravings from the Americas, portraits of the Puerto Rican painter Jose Campeche and the Mantegna Tarot. 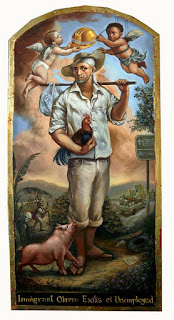 On this work I have created a pantheon of fictional characters that act as purveyors of a social stratification that obeys the rules of a globalized world. The imagery, attire and colors utilized in these pieces suggest a cultural, socio-economic and political colonialism that is still in effect and revitalized through globalization and corporate world domination. 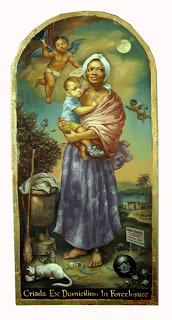 Each character is accompanied by plants, animals, angels and symbolic objects that represent not only an aspect of our society but also a contemporary issue of global consequences.  From the homeless beggar to the CEO, the archetypes and recurrent themes that transcend time, culture and geography are exposed. 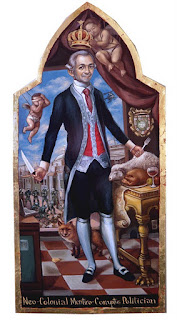 In the present work I incorporate text in Latin, English and Spanish. This combination of languages relevant to world history, are reminiscent of past and present empires and intends to open a dialogue between distant ages and civilizations. The constant use of anachronisms, parodies and satire aims at establishing relations and similarities between two periods: The world revolutions that occurred by the end of the 18th century and the socio-economic global crisis of the beginning of the 21st century.  Both were times marked by an intensified polarization between social classes, inconformity with colonialism, a prevalent economic system on the verge of a collapse and aspirations of change that found expression in protest and global revolution. 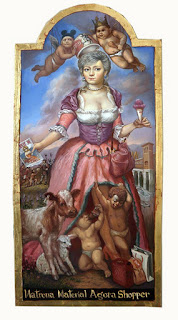 Mcolonial Citizens  as the title suggests, in allusion to a transnational fast food chain, explores how our present society is colonized by large corporations through the conditions imposed by the global market, consumerism and mass media. This “neo-colonialism” does not only affect Puerto Rico, the oldest colony of the Americas but the whole globalized world.  The intention is to provoke the questioning of our present day socio-economic conditions and what role corporations, money, profit and the neo-liberal policies play in our citizen life.

For more information on this work and the exhibition you can contact the gallery at 787-289-0505 e-mail: infor@petrusgallery.com
Petrus gallery is located at Calle Hoare #726, Esquina Calle Las Palmas, Miramar, San Juan, Puerto Rico
The opening for this exhibition will be on February 9th 2012 at 7:00 p.m. and it will last until February 29th 2012.