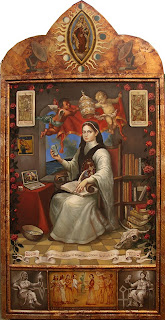 “La Papisa” (the Popess) is a retablo painting inspired after the image of Mexican nun and poet, Sor Juana Ines de la Cruz, who lived during colonial times and considered to be one of the first feminists in the Americas.  Connecting her image to that of “The Popess”, the second major Arcana from the Tarot, presents an opportunity to address the empowered feminine archetype. The original Tarot card for "The Popess" served as an anti-papal satire and it alludes to the legendary Pope Joan who ascended through the male dominated ranks of  the Church and became the first and only female pope in history.  In defiance of the Patriarchal Church, “La Papisa” stands for her right to learn, read, write, speak her mind freely and even become a beacon of knowledge for the rest of humanity while freeing herself from the imposed religious institutions and traditions that for so long have defined her. This piece departs from colonial painter Miguel Cabrera’s painting of Sor Juana in her library with a book on her lap but adds in other elements evocative of contemporary technology and pop culture as well natural elements with symbolic meaning. 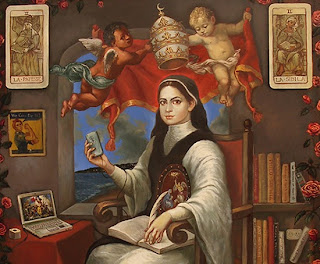 A miniature replica of Delacroix’s “Liberty leading the people" is shown in the laptop screen sitting on the table. Two little angels hover above the protagonist and are about to crown her with a papal tiara that shows a lunar symbol instead of a cross on top.  Beside them, two Tarot cards depict different interpretations of the same archetypal figure. Above them, two satellite dishes (receptive symbols for communication) point towards an image of Our Lady of Mount Carmel within a mandorla.

In the predella below, we encounter three plates depicting two goddesses (Pallas Athena and Vesta or Hestia) from classical mythology and a central narrative depicting women artists, musicians, spiritual leaders and activists with the statue of Lady Liberty in the background. Below an inscription in Spanish reads: “Leer, Rezar, Expresar, Dar, Observar, Manifestar” (Read, Pray, Express, Give, Observe, Manifest). A scroll on the main composition above is in Greek, Latin and Hebrew and it reads: “Sofia (Wisdom) Sapientia Fortitudo et quoque Sanctitatem iacet infra nos (discernment, Strength and Sanctity are found within us) Shekinah (Feminine blessing of God).

The idea of having the message from this piece be hidden or veiled relates directly to the archetype depicted. The feminine approach to knowledge can often be through Intuition or mystical practices that can evade mechanistic male reasoning. Every one of us can access the feminine, lunar, intuitive and mystical ways of understanding the world because the feminine aspect is ingrained as the anima in our psyche. The books, fish in a bowl, animal skull and roses reflect on theses mysterious archetypal qualities. 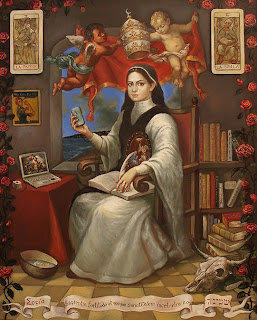 Posted by Unknown at 6:17 AM No comments: