"The Water Flask", "The Plate" and "The Exchange" (El Intercambio) are three new paintings I just sent over to La Antigua Galeria de Arte in Antigua Guatemala. For all three works I used friends that live in Guatemala as models for the characters. All three contain narratives that relate directly to the Neocolonial status of not just Guatemala and other Central American countries but of many more across the globe. The readings of Yuval Harari and Jared Diamond have been influential in my work. I find more and more clearly the historical connections and continuous line that bridges Imperialism from the ancient world to the European conquest of the Americas to the current global colonization by large transnational corporations. What drives this unity  for conquest and domination is a blind belief in the fiction of money and power. Today money seems to the universal religion that unites all in a common capitalist cause. When  animals are seen in merely  utilitarian terms, as objects and not as beings with rights, they become mass produced food and commodities. These in turn become processed objects valued in monetary terms. The same happens with many other precious natural resources from water to plants to the land. All becomes subject to the rules of the market. This belief in the supremacy of capital is ultimately contributing to the destruction of almost everything that lives on this planet, therefore leading to the suicide of our own species. These works reflect on our histories, inherited myths and current fictions. 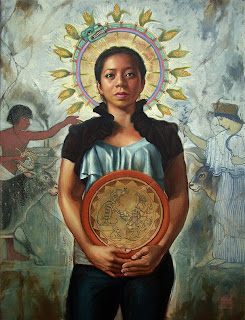 Posted by Unknown at 7:56 AM No comments: