2012 is a year of great creative possibilities and about time to start updating my blog with the most recent work that has come out of my studio. One of my most recent paintings is titled"Spraying Global Occupation". It is a triptych I painted with oils on a small altarpiece "retablo" I commissioned in Antigua Guatemala  last year. I just wrote a brief description about the work. I'm very pleased to share this one with you all. Enjoy! 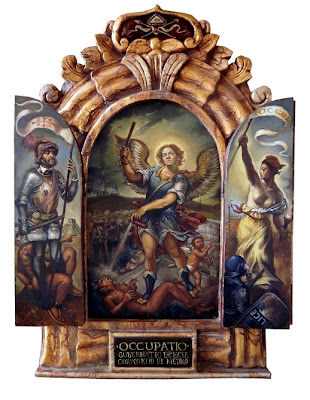 Inspired by recent Occupation movements that started to spread globally by the end of 2011, I created this triptych altarpiece to connect some historical events with the present moment. The use and appropriation of Roman Catholic imagery creates another level of spiritual complexity to the historical narrative. In the centerpiece a representation of Saint Michael the Archangel is defeating the devil this time not with sword and scales in hand but with a police baton and pepper spray. 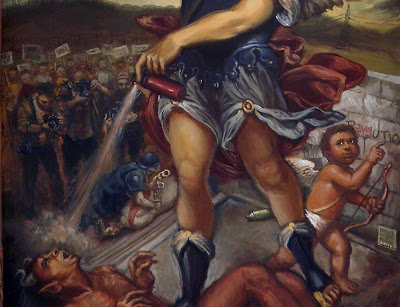 "Spraying Global Occupation" (detail)
In the background a cupid has just sprayed the word “Revolution” on a wall.  Nearby camera men shoot their cameras at a police handcuffing Jesus.

On the left wing a representation of Charles V Holy Roman Emperor stands proudly with a banner displaying a cross and corporate logos. This character is an embodiment of supreme Imperial power from the time of the conquest and colonization of the New World. At his feet a skull masked indigenous character points out to the right. On the right wing I have appropriated the female allegory of Liberty guiding the people from a painting by Delacroix. This time she carries a new banner while confronting an anti-riot police at the bottom. 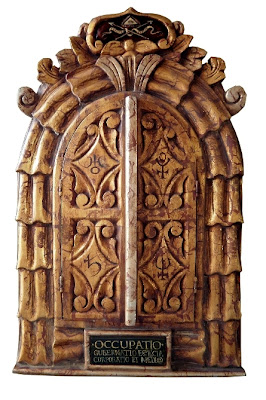 "Spraying Global Occupation" (doors closed)
The inscription on the lower segment of the piece translates from Latin to English as: “Occupy Government, Church, Corporations and Media”. The symbols depicted on the closed doors are those of the planetary signs of Uranus, Saturn, Pluto and Neptune. These as well as the imagery used in this painting respond to the study of archetypal astrology and the planetary alignments associated with the French Revolution and the Occupy Global movement. Interpretation and meaning of this piece is open and multivalent as in archetypal astrology.

"Spraying Global Occupation" is available at Jane Sauer Gallery, Santa Fe, NM. It will also be in display in the gallery booth at Art Palm Beach in January 20-23 2012.
Posted by Unknown at 5:49 PM 3 comments: