"El Mago" a Preview to my upcoming exhibition "Devocionales"


"El Mago" is a retablo painting I would like to share with you, as a preview for my upcoming solo exhibition  at the Mesa Contemporary Arts in Arizona, Devocionales: Neo-Colonial Retablos from an Archetypal Perspective". 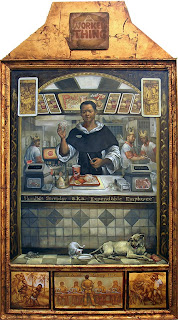 In correspondence to the first Major Arcana card from the Tarot, “El Mago” (The Magician) relates in this particular piece to labor and service.  The image of Saint Martin de Porres, a colonial saint from Peru served as inspiration for this re-interpretation of the “magician” archetype. In Christian Iconography he is often depicted as a mulatto Dominican brother in a hospital, holding a broom, for he considered all work to be sacred no matter how common. 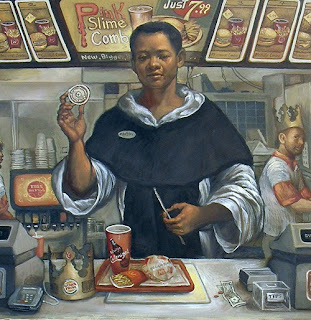 In this version our saint finds himself in a fast food restaurant and instead of a broom he holds a straw (male) and a plastic cup cover (female) while serving a meal.  Many of the miracles performed by this saint seem almost as if they were performed by a magician (levitation, bilocation and others). One of the miracles De Porres is famous for is having a dog, cat and mouse eating peacefully from the same dish.  The magician assumes the role of a mediator between opposites. As a humble mixed race alchemist, he dwells between two worlds, sacred and mundane, past and present, natural and civilized world.This archetype is also correlated to Mercury, the ancient god of commerce, travel and communications.

On the lower portion of this piece we see a predella with three narratives. On the left plate there is a monochromatic drawing of a white man whipping two chained black slaves. On the right plate, there is a drawing of two sugar cane workers and on the central plate a sweatshop manager stares down at exploited female workers. From colonial slavery to globalized slavery, the narratives are consistent through time. 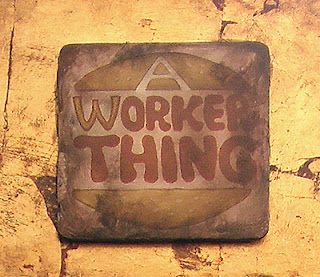 On the top of this piece there is a familiar square like logo that reads “a worker thing”, alluding to both a famous fast food chain restaurant and the issue in question. 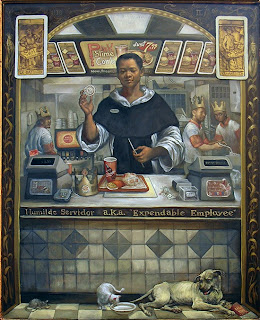 Three other restaurant employees can be seen in the kitchen background wearing crowns, reminiscent of the Christian Magi or Three Kings.   Above them and the central character, one card inspired in Le Bataleur  (The Magician) from the Tarot of Marseille and another card that reads “El Artista” (The Artist) represents a colonial painter as an embodiment of this archetype. These esoteric images blend in with the mundane images of a fast food menu in between them. On the counter rim I have employed an old colonial caption device describing the individual above which reads in Spanish and English combined: “Humilde Servidor A.K.A. Expendable Employee”. In this retablo, trhough the lens of neo-colonialism and colonial history, I comment on how work can enslave but at the same time enlighten an individual in order to become free. In a way, work can be seen is an act of magical transformation.

Posted by Unknown at 6:54 AM No comments: