As part of my research and studio project I am currently studying Latin American colonial paintings particularly from the 18th century. There is much to be studied in this overlooked field. The work of many painters in the Spanish colonies besides being intriguing products of cultural imperialism, also stand out as primal models of  forged hybrid identites that still define our countries to this day.  There are two paintings that have caught my attention  The Virgin of Rosary by Puerto Rican Painter Jose Campeche and The Virgin of Guadalupe by Mexican Painter Sebastian Salcedo. The two are images of madonnas painted with virtually the same colors were also painted the same year (1779) . These visual links in history provide interesting hints on the pigments these painters used in their oil paintings. Here's a brief analysis of the colors they must have used. 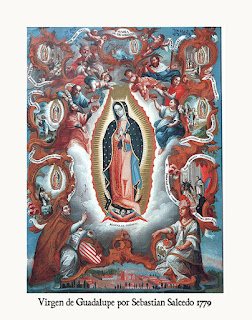 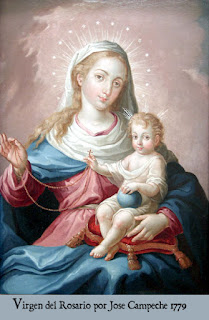 We can see that Salcedo and Campeche's blues are very similar and in fact quite often we see this cool greenish hue blue in European and Latin American paintings from the 18th century. The pigment in question is Prussian blue, invented in the early 1700's. It is one of the first synthetic colors to be produced and it substituted the expensive Lapis lazuli. Jose Campeche is known to have used this pigment in his paintings. We can also see it widely used the work by Francisco Goya. 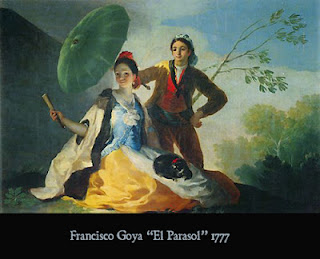 By the time of the conquest and colonization of the Americas, Europeans discovered a pigment extracted from the dried bodies of insects and was used by the Aztecs as a dye.  The insect is known as cochineal and the color they got from it was a beautiful alizarin carmine like deep red. Today it is used in cosmetics and food under the name of Red 40. This pigment was widely used as an oil pigment by the time Campeche and Salcedo were active so it is probable that they might have used it in their work. The pigment is known as Indian Lake or Carmine lake. Rose madder would be the other option. Today Alizarin Crimson or Quinacridone Red have far better lightfastness so they are recommended above the others.

Here's a very brief analysis of the colors used by Jose Campeche on this painting: 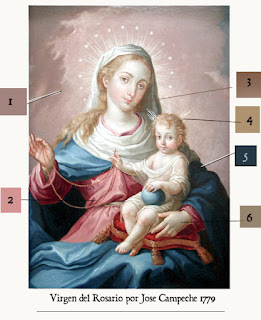 Both  artists were using a very limited palette  like most painters in the Spanish colonies the selection most likely would include the following :

1. Lead White
2. Carbon Black
3. Raw Sienna
4. Burnt Sienna
5. Burnt Umber
6. Raw Umber
7. Yellow Ocher
8. Vermillion Red
9. Rose Madder (or some other deep red lake color)
10. Prussian Blue
Some variations to this list may be found but this seems to be the most common palette for the painters in the Americas by the 1700's. Most of these colors I already use in my work except for the blues and reds which I will adopt to emulate the late colonial visual language in order to communicate my ideas about neo-colonialism.  I hope to share more insights like this in future posts.
Posted by Unknown at 1:41 PM No comments: