The Uranus/Pluto transit for 2015-20: An exciting time to be an artist.

As 2014 comes to an end and we welcome 2015, it is always good to look back at our own challenges, lessons and accomplishments for the year as well as look forward to what lies ahead with optimism and a mind full of creative possibilities. For me, this year represented change in many fronts. My wife and I moved from Savannah, Georgia to Houston, Texas so this has been the opening of a new exciting chapter in our lives. In my new studio I was able to complete the paintings that eventually went to La Luz de Jesus gallery in Los Angeles.. After having my first solo show in California I find new exciting horizons to explore and the prospects for the future look bright. Now that I'm about to become 40 I can feel the Uranus opposite Uranus energy in my natal chart slowly shedding its light onto my present creative spirit. 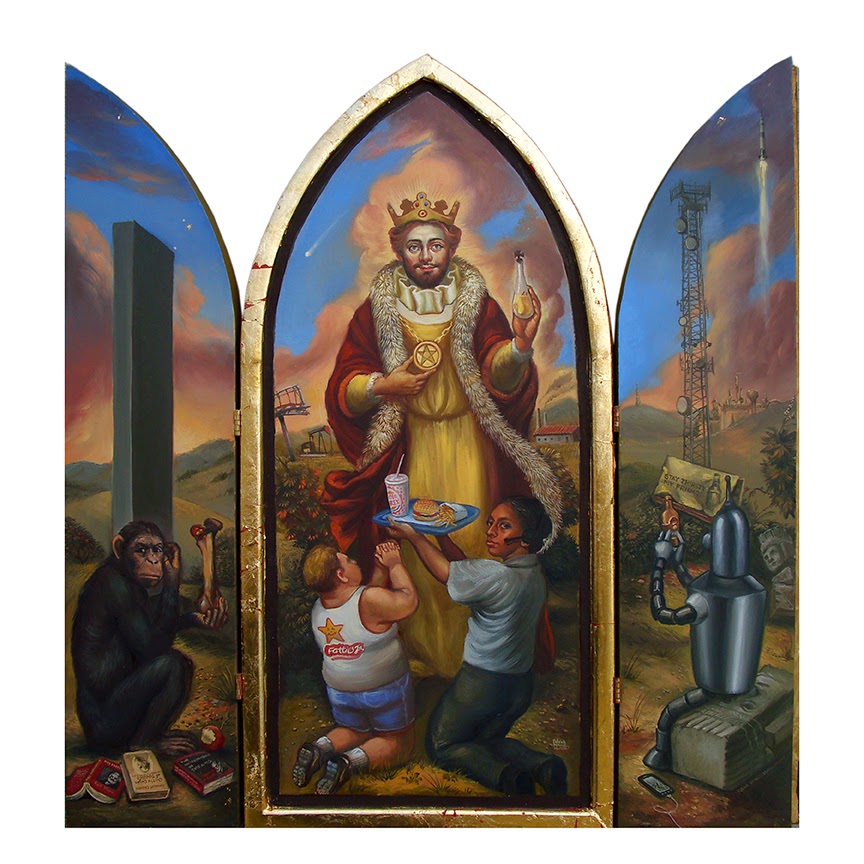 Alchemista Rex. 2014. Oil and metal leaf on triptych panel 23 x 24 inches
Many of the greatest artists throughout history, from Michelangelo to Pollock have encountered their own creative breakthroughs around this age. In archetypal astrology this is known as the Uranus opposite Uranus effect. Others call it the mid-life crisis. It denotes the position of the planet Uranus in one's birth chart at the time it is exactly opposite to where it was at the time one was born, this is from the age of 38 to 42. The planet Uranus is the planet of revolution, technology, originality, inventiveness, creativity, the Promethean calling, radical new ideas, the power of the youth, breaking away from traditions and old rigid authority. This is the energy that moves artists to create their best masterpieces, scientists to discover new theories and revolutions and reforms that change whole countries. This kind of energy is also often compared to that of thunder as it is so sudden, unpredictable and it can either kill or start a fire. But it's also the liberating epiphany that enlightens and inspires the mind and soul of anyone who creates. 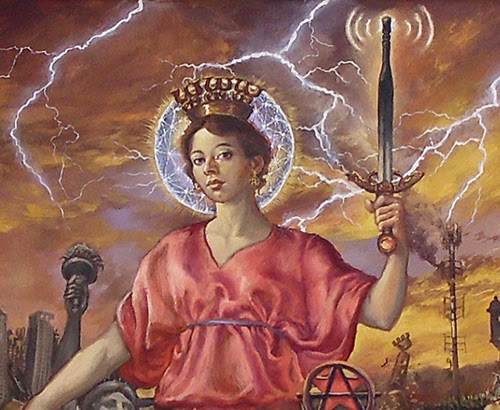 At the present on a global scale we are going through a Pluto square Uranus transit. Pluto being the planet associated with the masses, terrorism, unseen forces, the wild, magical and occult aspects of nature. It is sex, death, regeneration and the possibility of alchemical transformation in all things. It's a dark, intense energy lying underground and within the darker side of humanity and also with money, greed and corporations. So it is not surprising at all to see how the world events have unfolded in the past years.  As we can see the notable increase of mass protests, police abuse, acts of global terrorism, historic changes in global policies and planetary changes at an environmental scale, the Plutonic and Uranian energies start to show their colors now not only through the news but in our own lives and in the art and media we feel attracted to. 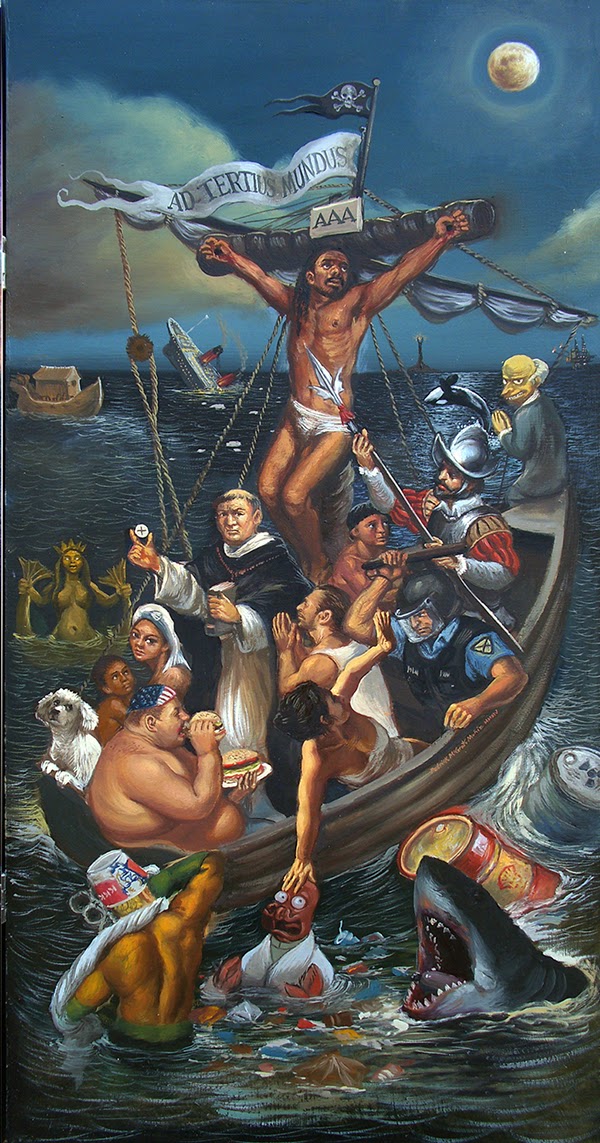 Detail of Mare Magnum. 2014. Oil and gold leaf on triptych panel 48 x 30 inches
Of course as with any other  planetary transit, it is cyclic and it will pass. This specific transit is expected to fade out by 2020 but felt at its peak in the coming years 2015 and 2016. As an artist I have studied archetypal astrology and see how these planetary transits have affected my work. This knowledge has made me more consciously aware of the hidden energies that have influenced me as an artist not only in the past year but for my whole life. This is not to be taken as a Sunday newspaper horoscope reading. It is much more complex, deeper and meaningful on both a personal level as well as on a global scale. 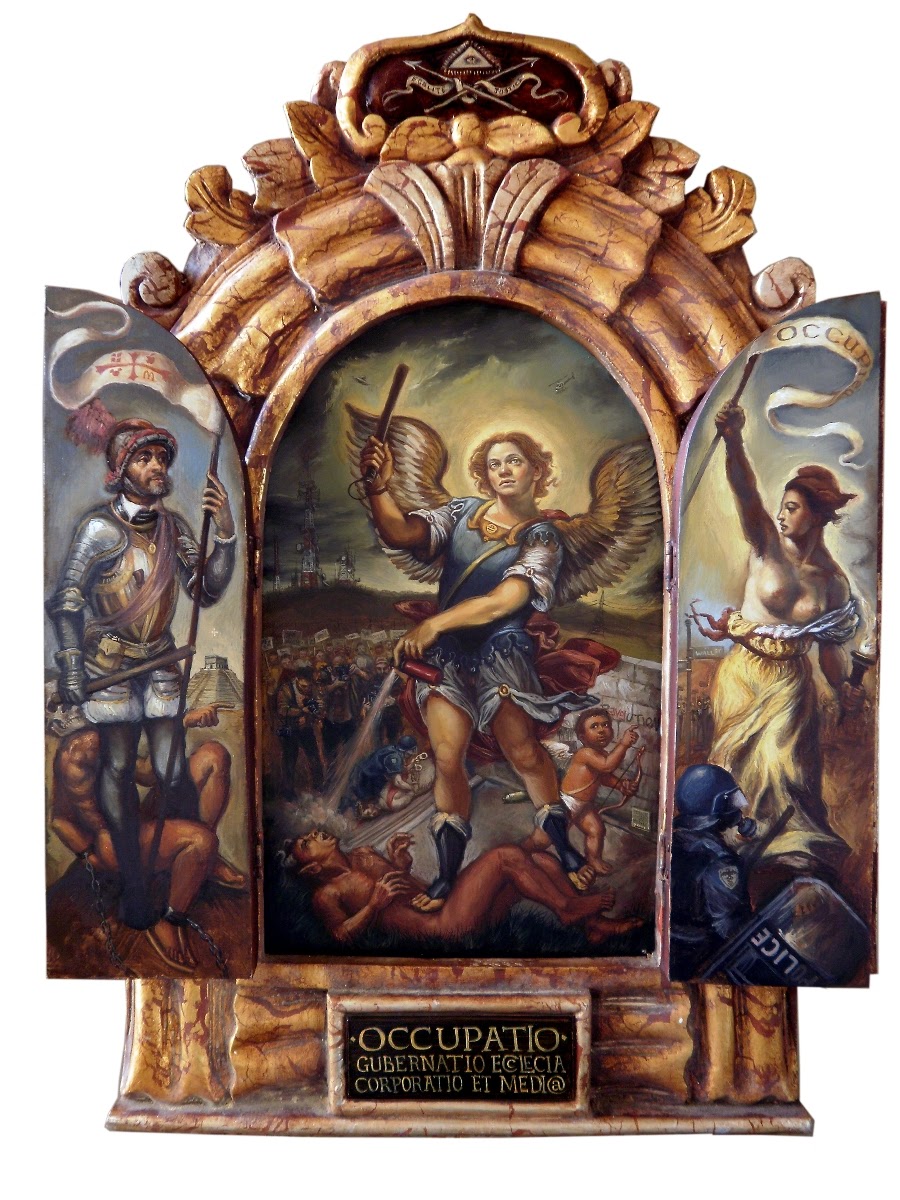 Spraying Global Occupation. 2011. Oil and metal leaf on triptych panel 25 x 18 inches
As I look back 7 years ago when I developed my master thesis Iconsumer at the Savannah College of Art and Design, I can appreciate the growth I've had ever since. With what started as a series of paintings linking Spanish Colonial art and Catholic Iconography in retablo paintings with Consumerism, Pop culture and our present cultural neo-colonialism, in time it became more complex as I studied and added other subjects  to the pictorial discourse. From ancient mythology to modern archetypal astrology and from the Tarot to the study of archetypes, the work I have produced in the past years has been evolving with every reading, every experience and every self discovery I make. 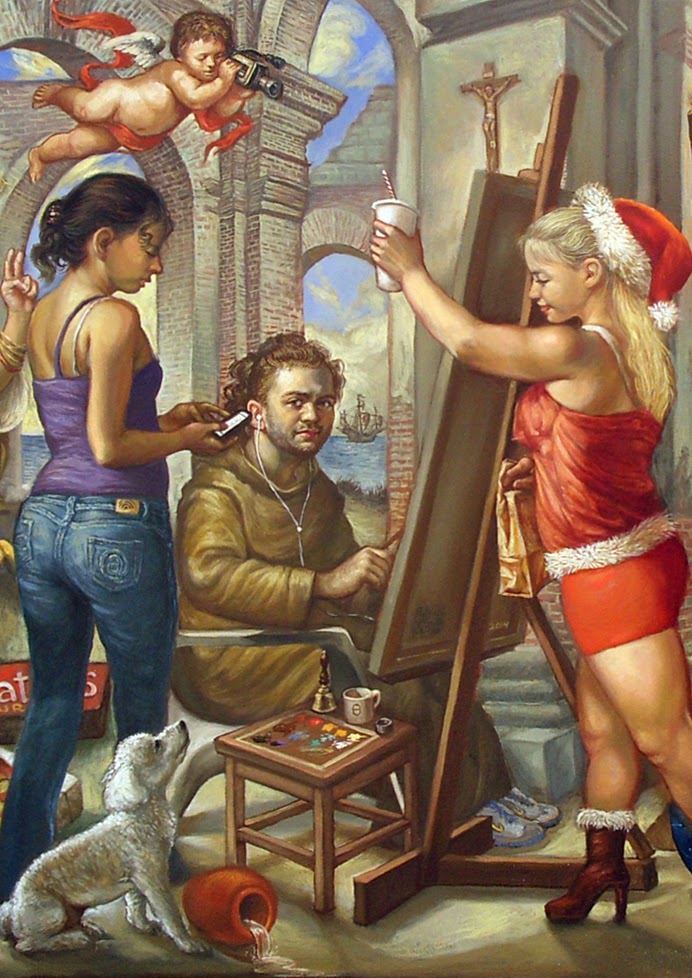 Detail of The Gathering. 2014. Oil on canvas 60 x 36 inches
At the present I've been studying Latin, the ancient language of the Roman Empire and the Catholic Church. My journals are filled with notes from history, mythology, politics and religion to my own dreams and life experiences. I guess the work of an artist is to deal with all this information, put it together and try to make sense of it all while creating something "new and beautiful when creating a work of art. I shall delve deeper into many of these topics and share my insights with the world not only through my art but in future blog posts such as this one.  As the Uranian energy as well as the Plutonic continue to exert their influence in our lives and become more and more palpable in the world around us, it becomes important to recognize and channel these cosmic patterns and invisible archetypal energies that actively influence our art, culture and society. In the meantime, Happy New Year to everyone and may 2015 shine the best of blessings into your lives.
Posted by Unknown at 10:00 AM No comments: