Hello everyone and welcome to my blog! I am currently working on more than one project at a time so there is much material to cover for this blog. As you may already know, this blog reflects on the  paintings I am working on in my studio and it is also a vital part of my research concerned with archetypes in Latin American culture specially in colonial times. Even though there are many more interesting subjects I wish to share with you here, I am trying to stick for now with the theme of archetypes and how these are represented in the Americas. 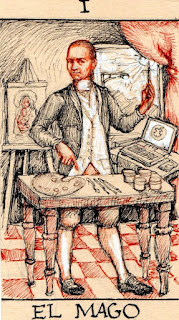 "El Mago" from the "Neo-Colonial Tarot of the Americas" ink on card.
by Patrick McGrath Muñiz
On this occasion I will briefly present the archetype of "The magician" or "El Mago" with special attention to Latin American cultural expressions of this character. When I encountered this fellow in the Tarot I felt immediatly identified with him. In this first card (numbered #1) we find a man handling tools on a table as if preparing for a performance or trick. He may be identified as an artist, alchemist, magician, pitchman or all of the above. In any case, we are confronted by a "jack of all trades" who wants to show us something. He is in the middle of an act of demonstrating how things work. In this sense he is a master or teacher about to perform for us a lesson. 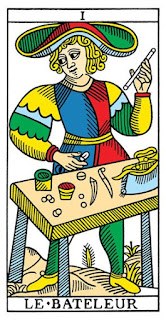 Le Bateleur or Magician from the Tarot of Marseille 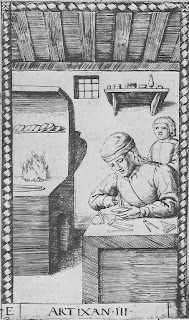 "The Artisan" from the Mantegna Tarocchi by Ladenspelder Cologne artist ca. 1550 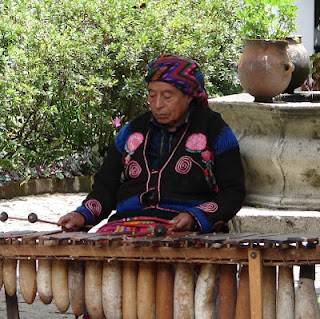 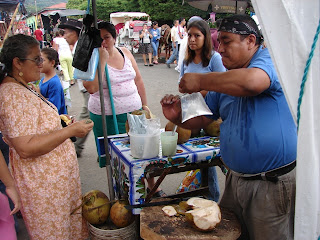 Coconut Water Vendor from El Salvador
If we take this archetype and try to understand it in sociological terms, he would be "the worker". In Latin America and also in the United States, many people struggle everyday in order to make ends meet, survive and provide for their families. In a way we can call this person "an alchemist" because he or she makes something out of nothing or from very little. This person is able to transform situations into opportunities. There is so much we can learn from someone like "El mago" and every one of us holds this potential within. "El Mago" knows no limitations and always re-invents him or herself learning new skills and becoming an expert at it. 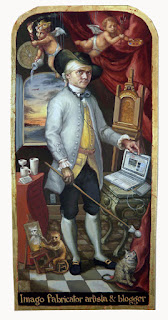 El Cronista (1999) Oil on canvas  (detail)
by Patrick McGrath Muñiz
Often this archetype is expressed as a spark of genius or thought coming from the mind and informing the  hands on how to play an instrument, hold a brush to paint, a pen to write a poem or to perform any task that involves an acquired specialized skill.

It is not uncommon to find images of this archetype identified with that of the wizard holding a magic wand, a crystal ball and wearing a tall hat. Harry Potter comes to mind or this guy: 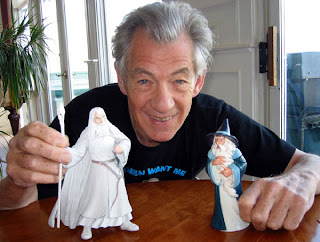 Ian Mckellen played the role of Gandalf, the wizard in the epic film triology "The Lord of the Rings" directed by Peter Jackson and based on the novel by J.R.R. Tolkien
In astrology, he is associated with Mercury, the planet of commerce, industry, enterprise, travel and communications. This is a highly creative archetype that can be focused, clever, multi-tasked, dexterous and practical and a workaholic. 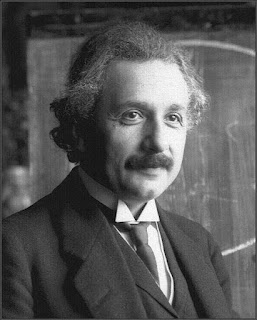 Albert Einstein (1879- 1955) German born physicist, famous for his theory of relativity
Often The Magician or "El Mago" archetype can  be found in individuals that excel with their minds becoming unique specimens in human history. Great artists and geniuses like Leonardo Da Vinci and Michelangelo or scientists like Albert Einstein and Nikola Tesla  revolutionized with their creations and discoveries. "El Mago" can become an enlightened being that reveals deep and complex truths trough arduous study and creative insight. 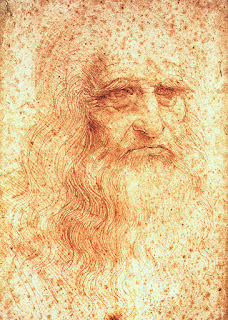 Leonardo Da Vinci , (1452-1519) Italian Renaissance painter, sculptor, architect, musician, scientist, mathematician, engineer, inventor, anatomist, geologist, cartographer, botanist, and writer.
When it comes to the Catholic Pantheon, every saint can be considered a "mago" for they have been known to have performed one or more magical or supernatural acts known in Christian terms as  miracles. I find the Magician from the Tarot of the Saints an interesting example to study. This Tarot was created by artist and author Robert Place. He has very good reasons behind the selection of the image of Saint Nicholas to represent "the magician". The magical reputation of this saint survives to this day in the guise of Santa Claus. 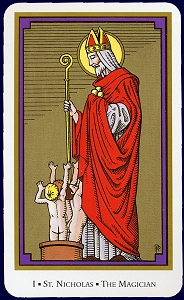 1. St. Nicholas, the Magician from the Tarot of the Saints by Robert Place
Interestingly there are three other mystical winter holiday characters that embody the archetype perfectly well.  The three wise men or the Biblical "Magi" in Puerto Rico are known as "Los tres santos reyes magos"  This Spanish tradition is celebrated in Puerto Rico, Mexico, Uruguay and other parts of Latin America as part of the Christmas festivities. It also forms part of the Puerto Rican tradition of "Santos" in which an image of the "Magi" on horseback  with gifts is carved on wood and venerated. 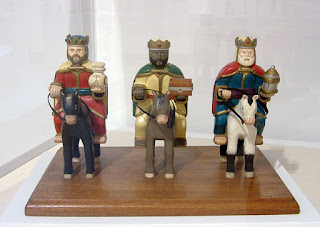 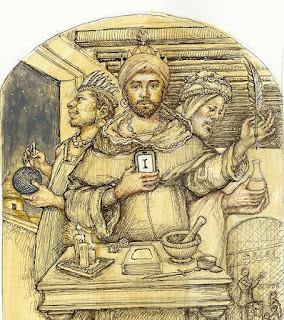 "The Astronomer, Theurgist and Alchemist" Ink and tempera on paper
by Patrick McGrath Muñiz 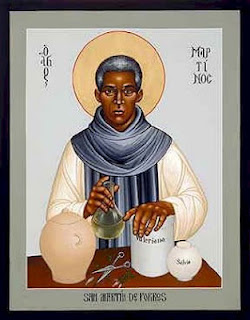 In Colonial Latin America there is one individual that seems to be the perfect embodiment for this archetype of "el mago".  San Martin de Porres a very popular saint in the Americas. Martin De Porres was a Dominican friar  in colonial Lima, Peru. He worked on behalf of the poor and lived in austerity. The image of Martin just spoke to me after having read about his life dedicated to the service to others while performing magical-like acts like bilocation, levitation and miraculous cures among other numerous miracles. I felt inspired by his story and simply had to honor him again this time with  a contemporary "retablo painting". Below is a preview of the painting I just finished. It is set in a fast food restaurant counter. Notice that Martin is "serving" us a "veggie burger" in correspondence to his ethical values (He was a vegetarian). I have included three workers with crowns in the background recalling "the magi". 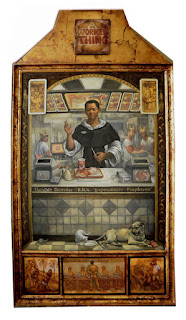 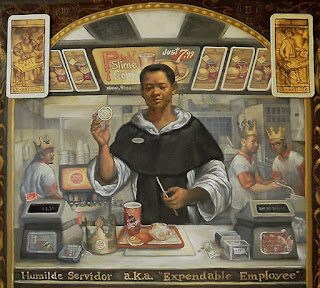 "Humilde Servidor a.k.a. expendable employee" (2012) (detail)
by Patrick McGrath Muñiz
On this piece I have connected the every day life of a worker at any fast food restaurant with that of a saint and magician. From factories to fields, from studios to monasteries, from laboratories to classrooms, the magician is performing  mysterious and creative acts trough all of us in one way or another. On my next blog entry I will talk write about "La Papisa" (The Popess) the feminist principle and how it has been embodied from Sor Juan Ines to Frida Kahlo.
Posted by Unknown at 10:36 AM No comments: