Christianity, Mythology and The problem with "Passe"

I've been working all day today on a painting which the subject matter is mythological. I have depicted in this painting on center stage Venus, the goddess of passionate love and beauty. I have taken inspiration on several references and models for this painting. I will describe the work in detail and even post a picture of it. But first of all It would be good to explain why I'm so much interested in this mythological figure. Before I developed any interest in religious subject matter in my work, I already had mythological figures in it such as Icarus, the goddess Athena, Ares, and the Sirens among others. What lead me back to this path once more? I guess art as life is cyclic and one always goes back to what feels natural and myth since childhood felt quite natural to me. It has been my main source of inspiration even when I was painting Christian saints, I must confess Ive been thinking about the gods and goddesses. A gallery owner not long ago told me "We dont want mythology in our gallery, it is "passe", meaning out of fashion. I replied inmediatly, "what about religion? isn't that "passe" as well?". "No, that is current" she said. Maybe she is right but then again I can't help but question these assumptions on whats outmoded and whats not. When we refer to religion in any country in Latin America you can be quite sure we are talking about Christianity. If you want to probe this, just visit any bookshop in a country like El Salvador where the section titled religion only offers you Christian books. Christianity is so pervasive that I bet there are more churches than gas stations or as many as shops. Actually many are both churches and shops and sometimes I can't even tell the difference. They are simply everywhere. Now tell me that Christianity has no resemblance to consumerism. On top of that it has been around for nearly 2000 years and you tell me its not passe? Classical mythology had a very brief revival in the Renaissance and trough the nineteenth-century. After the impressionists and post impressionists, painting became more about paint rather than about history, religion or mythology. This to my understanding is what got us to where we are today. In a place and time where we don't even know whats what with so much intellectual BS. I say classical mythology  is calling for a serious revival and as an artist I shall heed that call. And no its not passe. 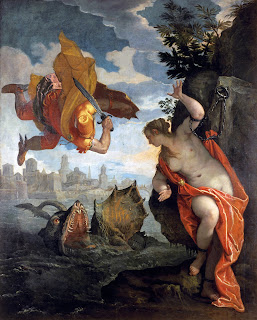 Of course if you judge art by being outmoded or "In" fashion then you will not see favorably anything that resembles classical art. If you are too preoccupied by current trends the art world today you might not even see the value and transcendence in a great work of art done by a master no matter of what era. See, someone like Titian, Michelangelo or Raphael were not trying to keep up with trends, instead they looked back in time and rescued that which what they thought had significant value and should be kept alive in their own time and culture. Many people blinded by novelty and their own definition of "originality" seem to miss a very important aspect behind a great work of art. This aspect is Transcendence. By this I mean an aspiration and achievement to go beyond one one's time and culture and boundaries. Some call it to be ahead of time. I see it as being back in time. Either way it goes beyond our temporal limitations. Any work of art that is remembered trough the ages transcends time. Fame overcomes death and this immortalizes the artist  and his models. This is also considered a Classic, having lasting significance or worth,  . Think about the Victory of Samotrace of the Pyramids of Giza they have endured through the ages and this makes them great. Ok, don't get me wrong here because it is not my intention to say that contemporary art cannot be great. Of course it can! But it has to remember who his parents and great grandparents were stop behaving  and amnesiac childish. In order to do this it really has to go beyond trends, beyond "passe". Perhaps by taking a closer look at Christianity and Contemporary Art one can discover some surprising similarities. Both are relatively new, both are dogmatic in their views. They become systematic, predictable and pretend to be the only choice and the only way to salvation. And they really believe to be the only path and brainwash people into believing their doctrines. They convert millions and disregard any stories that might look very much like their own and  came before them as works of the devil. Think about it, Im sure you will find even more similarities.
Posted by Unknown at 5:50 PM